And I'm not referring to the various recent meteorological events that have left people around the globe paddling knee-deep through their homes. I'm talking about ingredients - and more specifically those things that come to us via some kind of industrialised treatment and packaging process. Almost without fail, they are all full of water....

You'd think that when a recipe calls for 4oz of raisins, nothing could be simpler.

If the recipe dates from before the introduction of plastic-packed food - and many of them do, even if they have been recently churned out yet again and glossily photographed by the latest TV celebrity cook - the chances are that the original writer meant 4oz of bone dry rais 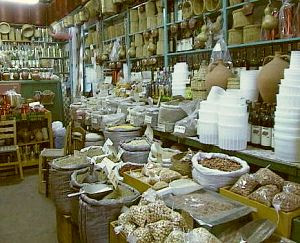 ins of the sort I can remember being sold from jute sacks, along with apricots, prunes, rock-hard salt cod, and salt anchovies that had been preserved so that you could stand them on end. All these things were stacked together on the floor of the Aladdin's Cave that was Zani's, the local grocer in Greece in the '70's, who sported a handlebar moustache and a grizzled expression that came straight out of Zorba. The raisins he sold were tough, leathery and definitely chewy: you couldn't have used them without a good soaking first. The pre-soaked raisins generally available today are about 25% heavier than the original .........so, you need to increase the quantity of any dry fruit by about a third if you want the result the original recipe-writer intended.

And it's the same with meat. Bacon, ham - in fact, most meat - has a much higher water content these days than used to be the case. The reason is simple: it's all sold by weight, so the heavier the better - at least, from the grocer's point of view. Most fresh meat is 'hung' sealed in a plastic bag, and modern bacon is better described as 'sodden' rather than 'leathery'. The practical - and damaging - result of this is that with any cooking treatment other than roasting, the water merely gets released in the process, and seriously dilutes the flavour of the end result.

There are ways to address the problem, however.............My rule of thumb is to increase the quantity of flavouring ingredients in most recipes such as lardon, pancetta etc. by 25% and either to go easy on the liquid in stews, or else - more often - to plan to reduce the sauce at the end of the process to the absolute minimum needed for serving, and thus remove the excess water.

Pomiane's recipe for Beef with Peppers is a good example. In the good Doctor's day, the air-aged beef would have been dry to the touch, browned easily in a little fat and have given off little to no water during cooking. The root vegetables he used would quite probably have been in storage for half a year in sand and would have been getting a bit gnarled. Added to which, his earthenware casserole, with its inevitably ill-fitting lid, would have ensured that the end result - even with the addition of wine - would be tender meat

in a very little unctuous sauce.

When you read these days of having to seal the lid of the daubière with flour-and-water-paste 'to keep the precious liquid in' remember this has become completely redundant - with modern equipment and modern ingredients, you could leave most stews in the oven all day and you'd still end up with the meat and vegetables swimming around in a complete soup!. Following most recipes to the letter, particularly if you are using a spanking new Le Creuset, you'll find you end up with pints of insipid liquid which need reducing in volume by at least 3/4 in order to get some flavour back.

Here's how to do the reduction:

1. Strain all the solids from the stock while still warm. A large coarse sieve is ideal but failing that a colander will do. Wait a few minutes for all the liquid to drain through.

2. Degrease the liquid. Either by leaving it over night in the 'fridge and removing the solidified fat or, if you are in a hurry, using a fat separator or, if you have plenty of ice cubes, pouring the cold stock slowly over a colander full of ice: the fat will stick to the ice and the liquid will fall through.

3. Boil the de-greased stock in the widest pan you can lay your hands on - a sauté pan is fine - until it is literally syrupy. You almost can't go too far - well, don't go on until it burns - you can always add a bit of boiled wine if there is too little juice. Scrape down the sides of the pan which will have a film of concentrated stock and then return the stock to the solids. It won't nearly cover the solids but there only needs to be just enough juice to serve.

4. Reheat carefully when needed, check the seasoning before serving

Salad of Endive, with Roquefort & Walnuts, in a Sherry Vinaigrette