A Matter of Perspective.... 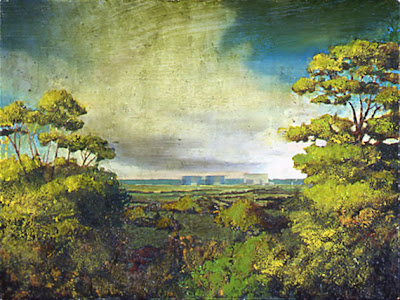 To the Royal College of Art, for their summer show. Much of it extremely impressive - and the buzz of ideas cannoning off the walls was stimulating in the extreme. I was even drawn in by some of the performance art, which normally leaves me fairly cold - particularly Adam Jones' mesmerising 'Lady in Red'. Another one to watch is Seung-Hyun Suh, whose designs in glass and silver are simple and beautiful. Star of the show, though, for me was Sam Douglas and his intense oil-on-board landscapes, with a rich detail that comes straight from Seventeenth century Italy. Splendid!

We dined last night with the Brancolis-in-London. Moroccan Lamb in Pitta bread,

with a delicious tzatziki (it had another, Moroccan name.......but it was definitely Tzatziki), followed by a meltingly gooey Lemon Tart. All washed down with an excellent Crozes Hermitages '98. We took along a box of Caramel truffles from Maison du Chocolat in Picadilly - ruinously expensive, but the only option these days for good chocolate on a Sunday, now that Pierre Marcolini (of happy memory) in Lancer Square appears to have bitten the dust. Such a shame; it's much to be hoped that he re-surfaces elsewhere sometime soon. Second mortgage aside, the Caramel Truffles were fairly wonderful.......subsequent analysis suggests that the fillings must have been frozen before being dipped in chocolate, and that they then had to be rolled in cocoa powder to disguise the fact that the chill of the centres will have taken the chocolate out of temper in the process of dipping. Once back at room temperature, though, the centres are almost liquid, and the taste is sublime.......

In theory, dinner was supposed to be taken in front of the TV, as we were all under a three-line whip to watch the entire series of 'Talking Sex with Mum and Dad' in a show of support for the presenter, w

ho is one of our nearest and dearest. I'm not sure why the show of support was needed, since most of the rest of the nation already seems to have weighed in and watched it without any of our help.......however, ours was not to reason why....
In any event, a Brancoli technological malfunction in recording the programmes meant that there was actually nothing for us to watch, so we were spared the ordeal after all, and could collapse into post-prandial grappa and chocolates with easy consciences. (There is a God!)

'Poached' Pears with Honey & Rosemary
Posted by Pomiane at 10:37