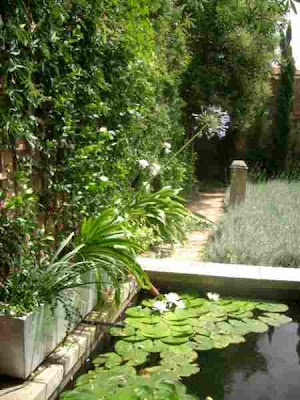 .......passed off without serious crisis. The weather was splendid, and much pre-prandial Kir was consumed on the terrace, before lunch each day (with the evening tipple generally chilled prosecco, enlivened with a dash of Creme de Peche de Vigne). In fact, the assembled throng were sufficiently chilled in general that it proved impossible to drag anybody out to

participate in the Saturday Passagiata , which actually looked quite lively, as Pisa is gearing up for its annual festa on San Ranieri's day on the sixteenth, when we have a luminara along the river, and much general jollification.

And to eat: the Technical Department had invested in industrial quantities of vanilla pods, delivered direct from Madagascar (www.riziky.be) and was all set to do everything with Vanilla. As it was, he managed two out of three, and was only persuaded off Pork in Vanilla on the basis that I'd done it last year as part of Masterchef 2006. Jennie produced a

splendid Fish Tagine, courtesy of a recent trip to Marrakesh, and the duffer of the weekend was a Fava Bean and Tuna Clafouti, which came highly recommended from a french food website and in truth would have performed a more useful function on a construction site than on the plate! Light and airy it was not!

Fortunately, we avoided being directly competitive, and the corporate triumph of the weekend was Sunday's dinner, when Peter and

Gianluca came down from San Remo and we feasted on Flambeed Langoustine infused with vanilla, on a bed of leek mirepoix, followed by Rabbit in a Mustard Sauce, with Ginger-glazed Pears, and finished off with an Almond Tart, baked with Oloroso and a layer of Quince Jelly. And the inevitable moonshine grappa, of course. I forget at what unearthly hour dinner finally finished........

Tomorrow, we're off to Pienza for lunch (ristorante Il Castagno - comes highly recommended) before a visit to Iris Origo's garden at La Foce; then dinner and overnight at Belforte, doubtless to chew on something that's been grilled over the fire, and a hearty glass or two of something reviving.

Casarecci, from Claudia, in Vettovaglie.

Peaches stuffed with Chocolate and Amaretti.
Posted by Pomiane at 07:52