People tend to assume that Italy is incomparable for food in every way imaginable - and although it certainly has its good points, there are some definite positives about eating and cooking in London as well. Duck, for one is much better in England than Italy - where it tends to be rather rubbery, and to be avoided either in the shops or on restaurant menus - also lamb, also beef, and definitely cream! Mention 'cream' to any expat Brit in Italy, and expect to unleash a flood of invective. Italian cream has negligible fat content, as you rapidly discover when you set out the first time to whip cream into a rich lusciousness. After bruisingly endless whisking, you end up - if lucky - with a rather bland froth, which merely collapses into a disappointing puddle if unwisely prodded. To manage expectations, remove mousses and souffles glaces from your list as soon as you travel south of the Alps..... And indulge without moderation every time you travel north of them!

And the other culinary highlights of London: ethnic restaurants! We're off this even

ing to see how Star of India is faring since its recent refurbishment.....although not normally a fan of high profile decoration in restaurants, the Etruscan theme that Reza has had in 'Star' for the past decade or so is quite spectacular. I worry that he's merely got bored with it, and ordered the place to be whitewashed for a change! Ultimately, though, as long he hasn't tinkered with the menu and it remains as good as it has been for as long as I can remember, then I'd forgive even the possibility of whitewash...... 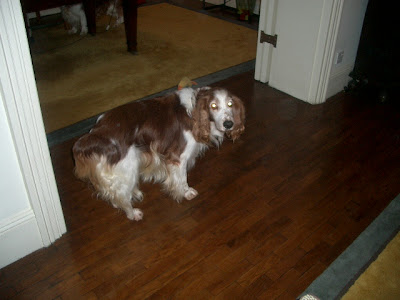 e, London can have its challenging moments. Yesterday morning, for example, in the rain, trying to get a urine sample from a Welsh Springer who had his mind on other things, whilst juggling two dogs, an umbrella, and a rather strangely moulded yellow plastic receptacle!

Last night's dinner: Globe Artichokes with Lime Mayonnaise; Confit of Duck (made at the weekend); and Tartes aux Pommes.