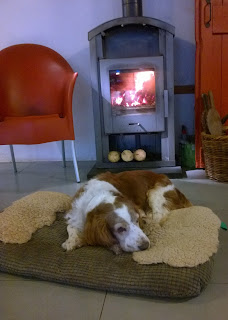 A wonderful, glorious ragbag of memories.

Always, even from the smallest puppy, he loved cuddles and demanded affection. Bright, and sparky, and beautiful.

At three months, he travelled across , reclining in his dog-cage in the back of the car, as he watched  the changing landscape all along the way. In , his first smart restaurant – although he had no idea that the blue potatoes that were served that evening were not as other potatoes are – and his first bubble bath. And down into , and to his own private world. Where, when he was young, the birds used to tease him, and entice him to chase after them on summer evenings as they circled low over the North lawn, and in May the garden at night was alive with galaxies of fireflies, and in winter there was always a blazing fire to lie beside as the flames leapt in the woodstove in the kitchen.

A world of endless tennis balls, to be thrown, over and over and over again, and which always had to be chased, and sometimes to be intrepidly tracked down, if they’d got lost in the undergrowth – and sometimes, even if they hadn’t, because sometimes it was fun to pretend, and to do the intrepid tracking thing, anyway.

A mixture of eccentricities: he always barked frantically at church bells (which is not always welcome, in a Catholic country, and living next to a church), and every time a bucket was filled from the garden tap, and at the sound which the long extension cord made whenever it was unrolled from its holder. Other dogs were to be avoided – he wouldn’t go into the piazza if another four-footed was visible even on the distant horizon – as were small children, which he clearly felt were deeply unreliable as a concept.

And he delighted in clambering into the bath after each and every gardening session, in order to have his paws washed. Whether they needed it or not. (And if they didn’t, then it took major powers of persuasion to get him to climb out of the bath again, paws ignored!)

When he was two, he adopted two small kittens which had been abandoned in the theatre next door, and thereafter he ran any and all other cats off the property, should such marauding interlopers dare to show even a whisker, and his own two cats thus lived a life free from molestation. Coming with me out to the barn, each evening, to feed the cats was always tremendously exciting, and a highlight of his day - although, his excitement could be explained possibly because he knew that feeding the cats would be  followed immediately by his own dinner being put  down for him.

Mowing the lawn always meant being waylaid periodically by Cuff, where he stood, alert and  bright-eyed and tense with excitement, waiting for me to spot the tennis ball which he would always have placed strategically within reach so that I could grab it, without missing a beat, and hurl it as far as  I could into the distance, for him to race after, and return once more. Da Capo.

When I lay out in a deckchair, to soak up the sun, book in hand, Cuff was always to be found stretched out in the shade of the nearest tree; and if I was in the hammock, in the orchard, he positioned himself underneath, and I always knew that if I reached down, my fingers would encounter the silkiness of his fur, where he lay.

If I’d gone into the garden without him, and he needed to find me – perhaps he’d been distracted in the kitchen by a biscuit, or even more enticingly by a morsel of cheese – and I caught sight of him in the distance, I would squat down, and hold out my arms for him. And, once he’d spotted me,  a dynamo of paws and of ears flapping as he ran would hurl itself across the garden. And, once caught, he would be lifted aloft in triumph.

Stairs, he never perfectly mastered. He came late to them, and even then, he tended to launch himself off at the top, and then allow gravity to do the rest. The bookcase at the foot of the stairs took a regular pasting, over the years, where he hadn’t managed to stop in time.

And he left-off stairs early, too, when arthritis all-too-soon compromised his back legs, so that he had to be carried up and down stairs, whenever it was necessary. He never seemed to mind, though, and he would wait patiently whenever he next required the services of a stannah-stair-lift. And Stannah never minded, either.

As he aged, he lost his hearing, and one of his eyes clouded over. And there was less hurling of himself across the garden…although he still managed to move quite quickly, even with the odd movement of his compromised back legs. But, he never lost his enthusiasm…for tennis balls, and for cheese, and, of course, for cuddles.

And I adored him.

He died, this morning. Peacefully, in his sleep. And, not without warning.

He was joyous and joyful. And, from the bottom of my heart, I salute him. 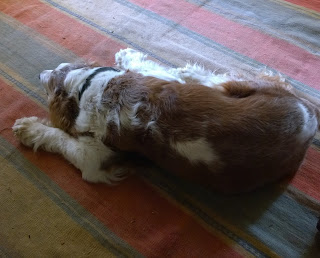