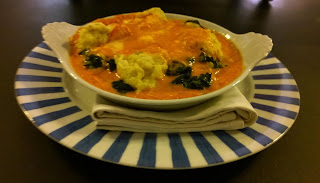 Delicious, light, and economical. Not a last-minute dish, as the mixture needs to sit for several hours at least before the brochettes can be poached - but, that apart, this recipe takes little time, and the end result can either be a light main course, or a substantial starter. In either case, it is sophisticated enough to present to guests or self-indulgent enough to enjoy on your own. The mixture, once made, freezes well, and so can be taken from the freezer and used in whatever quantity you need at the time.

The TD informs me that the sauce which cloaks the brochettes is a 'sauce aurore' - I'll take his word for it. As shown here, I like to place the brochettes on a bed of buttered spinach, cooked until just tender and seasoned with salt and pepper and a little nutmeg.

400g raw pike fillets, skinned (or any firm white fish; I often use either mullet or a fish we get here called gallinella...which in english is apparently a tub gurnard); 150g softened butter; 300ml milk; 150g plain flour; 6 eggs, separated; 1 tsp salt; generous pinch each of pepper and of nutmeg.

1. Process together the fish fillets and the butter

2. Bring the milk to the boil, in a small pan, and then add the flour and beat together with a wooden spoon over low heat until the mixture has adhered into a ball (think: choux pastry).Leave to cool down for five minutes.

3. Add the egg yolks and the flour mixture to the butter-fish mixture and process all together.

4. Whisk the egg whites until stiff, and then fold into them the mixture from the food processor, along with salt, pepper and nutmeg. Once properly incorporated, cover the bowl with clingfilm and refrigerate overnight or for at least four hours.

5. Bring to the boil a large pan (I use a large saute pan) of salted water. Using two spoons, form the mixture into little dumplings, and poach them in the boiling liquid for about five minutes, until they float to the surface.

6. Arrange the poached brochettes (as they have now become) on a bed of buttered spinach, in individual egg dishes. 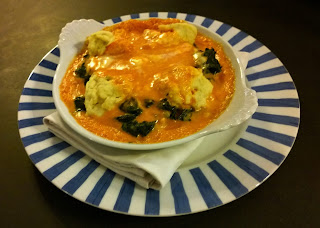