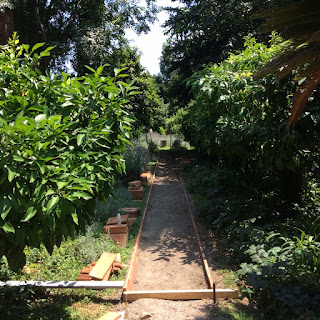 Finally, after years (literally) of dithering, we bit the bullet, and came to a decision about making a proper path between the agrumi terrace and the centre of the garden. You'd think it would be a simple decision.....ha! Gravel? Brick? Grass? Width? Length? Design? Oh, no...this was about as complicated a process as setting up the League of Nations. 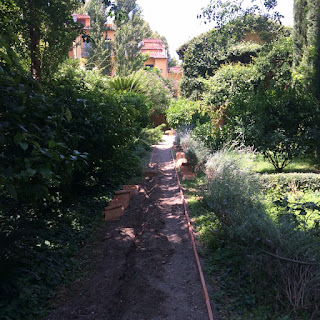 And, of course, the decision was made and then instituted just as we entered the hottest period of the year. Which meant that Giancarlo would manage two spadefuls of whatever, before lapsing into dazed immobility, as he stared into space and contemplated nothing. Every time he disappeared for lunch (which was often), I would pick up his tools and get another chunk of work done before his return, several hours later - but, in the end, we had to suggest that he left the finishing-off stage of the work to us,  to be done in the relative cool of the evenings. 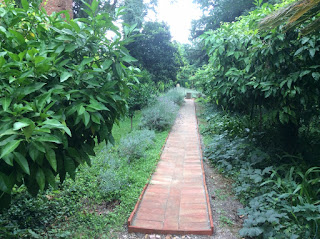 The path terminates at what will be (soon, I hope) a new fountain, situated perfectly centrally to the entire garden. Having arrived there by walking between the agrumi garden and the Woodland, the fountain (which, for some reason, we're calling 'the Well')  then gives onto the North and South Lawns, with access to the left to the start of the pergola and to the right to the steps which lead down to the box-edged paths. I wanted to call it The Well of Loneliness...but TD, for childish reasons of his own that we need not go into,  has christened it instead 'The Abastanza Pozzo'. 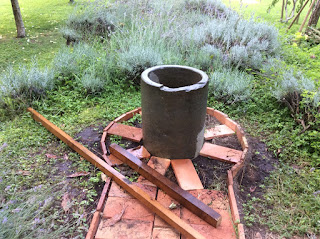 He is still sorting out the paving around the Well, itself - although, creation of all the pieces of the jigsaw is complete, and so we're really at the final stages of installation, and even the power supply from which to run the fountain has been checked and found to function  properly. 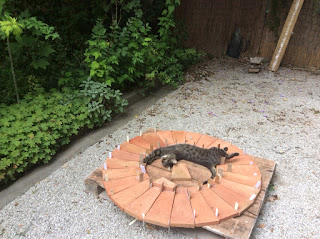 The feline four-footeds decided to try out the 'jigsaw' for size... 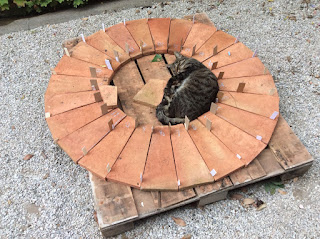 But rapidly got bored, and concluded instead that it made a surprisingly comfortable place for a snooze.

Soon, the calming sound of plashing should populate that part of the garden. And, come the autumn, the path will be planted densely on both sides with a collection of lacecap hydrangeas ( a hybrid of macrophylla and serrate, to take the relative shade beneath the citrus trees).

Ham & Melon (at this time of year, incomparably good!)