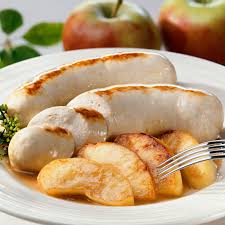 From the time when the Belfortes still lived on the windswept plateau of the Larzac, many years ago now, a Christmas memory remains of the Friday market in Millau, about sixty miles away to the north, and one of our few regular provisioning opportunities. It was from there that we used to buy foie gras, from the woman who had the stall in the corner of the marketplace, and we stocked up each week with cheese and hams and fruit and vegetables of every kind. Thirty years on, I still have my excellently supple green wellies (Chameau brand) which came from the hunting shop just off the square there, and invariably one of the final stops before we repaired to the cafe for fortification before embarking on the journey home once more was to the butchers in the small back street that, ran parallel to the marketplace, to buy there the best boudins blancs that you could possibly imagine. Light, creamy and entirely delicious, they were a benchmark against which all others have subsequently been measured...and none has ever quite come up to the mark.

The Technical Dept was determined that as part of the festive board at New Year, boudins blancs would be served. And with that in mind, he researched and experimented endlessly - and the end result was, I have to say, quite excellent. We had boudins poached, sliced and fried as part of the main course on December 31st, and then again, several days later, pan-fried in butter, along with some sliced apple, and then flambéed in calvados. And if the butcher in Millau is still around (which I doubt), then he would have good cause to look to his laurels!

You'll also need a sausage auger,  preferably one on a stand mixer such as Kenwood Chef, or one fitted to a piping bag.

1. Powder the dried mushrooms in a food processor and let them infuse in hot milk.
2. Soften the shallots in the butter until translucent.
3. Pour the infused milk onto the bread.
4. Blend the meat, soaked bread, cornflour, shallots, port, spice and seasoning in a food processor until it forms a fine paste.
5. With machine running add the egg whites slowly.
6. Add the cream slowly and mix for a minute only.
7. Fry a small sample of sausage meat and taste. Correct seasoning if necessary.

Oil the outside of the sausage auger. Slide the soaked casing onto auger, draw 5" of casing off the auger. Fill the hopper with the sausage meat and start the machine. As the meat fills the casing slowly slide more casing off the auger. Do not overfill the casing and try to avoid leaving any air bubbles (If you're doing this with a piping bag rather than a machine, then you might need an assistent at tis point - three hands, at least, are a good idea at this point in the process, when you need both to operate the piping bag, and ensuring that it doesn't come apart as you fill the casing, and also to ensure that the filling is evenly distributed within the casing) . When all the sausage meat has extruded, press out any air and knot each end of the casing. If desired, divide the sausage into links by twisting the casing at regular intervals. Prick each sausage 4 or 5 times to prevent them bursting. Poach the sausage at 75-80°C for 40 minutes.
Store or freeze when cold.

Fry sausages in butter until golden brown all over and serve.