will not be happy. The first day of June, and the rain has been teeming down since before first light; the sky is leaden, and the air is cool (cold?), with no promise whatsoever of summer - which, by the way, should be properly underway by now, and not merely limbering up indecisively, as it appears to be doing. 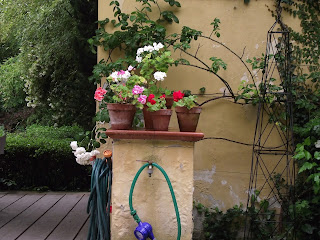 I hadn't given it much thought, but then realised that although May is now done, we still haven't felt tempted by rising temperatures indoors to move outside to the courtyard for dinner in the evenings. The Pisani shouldn't despair too much, though - according to Tempo Pisa (my preferred online weather forecast), we should be up to the upper twenties by the middle of next week, and so the italian exodus to the beach at every possible opportunity can get properly underway...which means that the Centro Storico, for us, will become a haven of calm in the wake of the departing population. Bliss.
In the meantime, the four-footed is resigned to a day indoors, curled up on his bed, and I'm making Pain de Campagne in preparation for a Glyndebourne-style picnic of smoked salmon sandwiches and chilled prosecco for consumption during the interval in this evening's performance of Bellini's 'Capuleti e Montecci', to be streamed from the Gran Teatre del Liceu in Barcelona right to Screen 2 of the Odeon at the end of the street. The wonders of modern technology.
In between dough-risings, the downside of a rainy day is the time available from gardening to look instead at gardening catalogues...and the probable decision that we do perhaps, after all, have room for another half dozen quercifolias...given that they are doing so splendidly this year...and that maybe a New Dawn would flourish in the relative shade of the southern pergola...and that maybe some himalayan climbers would do well growing through the trees behind the church.
Yet another reason to hope that the rain stops! 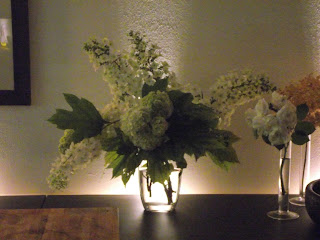