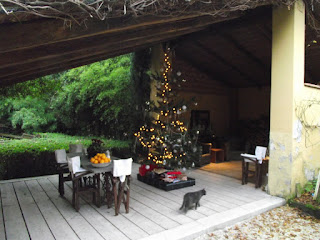 Originally discovered as part of a recipe of Jill Norman's for a pot-roast guinea fowl, this is an excellent accompaniment to any kind of game - the chestnut imparts a sweetness which works well with the flavour of game, but the presence of the other ingredients cuts across the sweetness very well, and so avoids any tendency for it to become cloying (which is my gripe with most fruit-meat combinations). This was served both for Christmas dinner, to go with pheasant (boned, and roast with a stuffing of juniper and orange), and again for New Year's Eve, when we had spit-roast venison, along with a rather complicated sauce which included a zibibio syrup and crushed coffee beans. It worked wonderfully!
The quantity indicated here is fine for three servings; when we were eight, for New Year, I tripled the quantities, and had sufficient left over to use subsequently as stuffing for ravioli for six generous servings - which was also delicious, served just with melted butter.

1. Melt the butter over low heat, add to it the diced pancetta, raise the heat and cook for a few minutes until the pancetta starts to give off fat. Add to the pan the diced celery and cook, stirring, to soften it, for another three or four minutes.

2. Pulse the chestnuts in the food processor - only briefly.....they want to be broken up but not reduced to a mush - and add them to the pan with the celery and pancetta. Stir to amalgamate, and then add to the pan both the marsala and the water.

3. Cook over low heat (I use a heat diffuser for this stage) for about half an hour, stirring frequently, until the individual ingredients have all collapsed. Add seasoning to taste. This dish can be cooked in its entirety several hours in advance, and reheated over a low flame once final preparations for dinner are underway; be careful, though - if the heat is too high, the mixture has a tendency to catch and for the bottom of the pan to become a claggy mess!