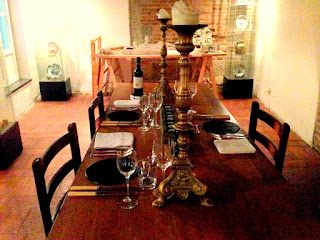 Has been generally acclaimed a triumph! Three days of intense (but not too intense) slaving in the kitchen, to excellent effect.

On Friday, the TD produced a black risotto of exquisite richness (garnished with scallops and samphire), which was followed by oven-poached chicken breasts accompanied by mouth-watering miniature baked potatoes, stuffed with a tarragon/guanciole mixture (Jennie's contribution), served with a sauce of piopini 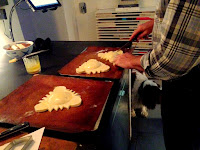 Saturday: weather was lousy, and so we spent the day indoors, poring over books of recipes. Jennie decided to ditch the chocolate torte she had intended to make, and instead she produced a chocolate medley of egg-white chocolate soufflé alongside an ice cream of white chocolate, 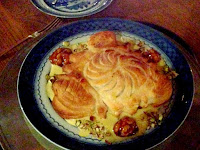 layered with raspberries which had been macerated in grappa. The soufflés were wonderfully indulgent and much richer and more luxurious than the version I usually make (so, I'm going to have to change habits), and rose to towering perfection. That was preceded by another done-two-ways production, when TD served magret de canard, pan-seared and then finished in the oven, alongside deliciously crisp confit de canard (made two days previously), and accompanied by  individual pommes anna, and vignole. A sauce of deceptive simplicity (a litre of stock, made from the duck bones, reduced to about 75 ml, and then thickened at the last minute, off the heat, with a nut of cold butter). And to start with, that evening, we had a terrine of foie gras, which I'd made earlier in the week (Mossiman's recipe, where the pieces of liver are marinated beforehand in port and brandy, and an improbably long and complicated list of spices, which 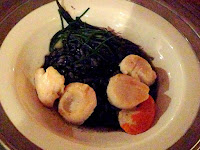 end up being subtle and beguiling in the finished dish). My contribution on the day was to make brioche, slices of which, lightly toasted,  were served with the foie gras, all helped on their way by a not-half-bad sauternes.

And then, last night, we coasted home, standards not slipping, with a starter (Jennie's) of velouté of asparagus, in which were tiny new potatoes (jersey royals, by preference) and flakes of seared salmon fillet; then, I produced spit-roast lamb shoulder, which had been stuffed with a  mixture of mint, garlic, beef suet, cream, and diced shallot flambeed in cognac, served with a lamb/cream/mustard sauce, and flageolets, warmed through with chopped sage and 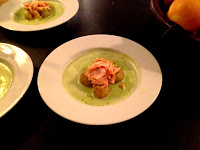 shallots. The latter helped on its way by a splendid 2010 Torres Mas la Plana. And then, into the home strait, with a napoleon of chocolate crisps, interleaved with  layers of pears, poached and diced and mixed with honey, and garnished perfectly with a few leaves of nepetella, from the garden.

We were all so pleased with the general results and experience that we didn't bother awarding individual prizes, but just started to discuss what we might think of doing for next year's event (which will be the tenth anniversary of the first time we did it, and so requires particular effort).

Feuillete of mushrooms, sauteed in butter with tarragon, with a poached egg and mustard hollandaise.

Crepes, with frangipane filling.
Posted by Pomiane at 12:03