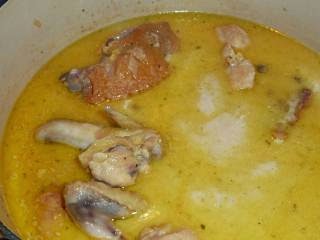 is the name this dish would go by, if I hadn't, in cavalier fashion, changed two of the three central ingredients from the original version. One from the early days of Nico Ladenis, you would have to be either extremely rich or merely deeply stupid were you to follow the recipe as NL describes it (and, what's more, insists that it should be made whilst respecting without question the ingredients as listed). Vin Jaune, an obscure wine from the Jura, retails at around £110 a bottle, these days, and morels - even dried - can rarely be found for less than around £25 for a small jar. Forget it! A perfectly serviceable Gewurtztraminer and a handful of dried porcini work quite acceptably, and all without venturing into the territory of a second mortgage*. For obvious reasons, I can't state precisely to what extent these variations take the end result away from what Mr Ladenis had in mind, but this dish is extremely good as described, and has the advantage of leaving plenty of excellent sauce for other and subsequent uses. The first time I tried the dish was several days before I was responsible for the main course as part of our Masterchef Weekend 2014, and I used the leftover sauce to very good effect on spit-roast rabbit wrapped in prosciutto, which had been stuffed with pancetta and fennel seed. And the reason I'm prompted to post it now is because a variation on the same rabbit recipe (except this time, also stuffed inside a suckling pig) will be taking centre-stage for Christmas dinner, later this week. That being so, and with 'programmed eating' in mind, we'll be having Poulet au Gewurztraminer tomorrow evening....and leaving plenty of sauce at the end!

* since first writing this...I have found the source of this recipe, from which NL originally took it - a book edited by Francis Amanutegui, published in 1970; the author is much less inflexible than NL, and states that in the absence of 'Vin Jaune' 'any dry white wine will do'...

1. Generously cover the porcini with boiling water and leave to sit for forty minutes or so; then, strain the mushrooms from the soaking liquid, and filter the soaking liquid through kitchen paper. Retain the strained liquid and the porcini. Heat the oven to 180 degrees C.

2. Melt the butter in a heavy ovenproof casserole. Dredge the chicken pieces with flour, and season them with salt and pepper. Sauté the chicken in the butter, enough that they lose their raw appearance, but try to avoid letting them brown.

3. Ensure all the pieces are in one layer in the casserole; cover it, and place into the oven, for about twenty minutes. At the end of this time, drain as much of the melted butter as you can from the pan.

4. Put the casserole back on the hob, without lid, and add to it the mushrooms and their soaking liquid (perhaps half a cup of the liquid, not more). Over medium heat, add to this the wine and the cream, and cook at a gentle simmer until the sauce has thickened slightly to become uniformly velvet in texture. Serve as soon as possible once the sauce has reached this point - if left to sit while you get through other courses, it might risk misbehaving!