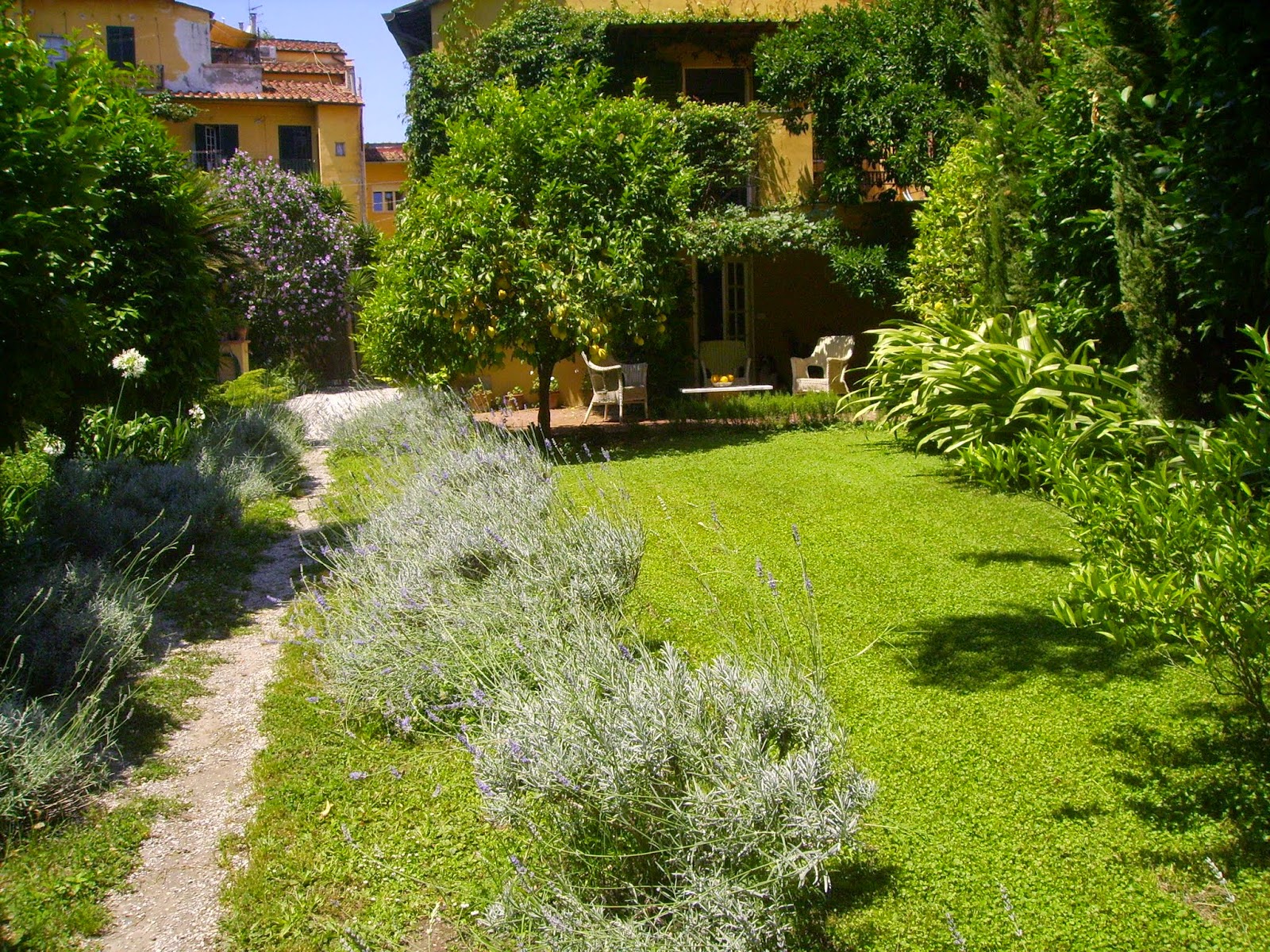 As usual, Tempo Italia has got the forecast wrong almost every day this week. Thursday - a dry day, according to TI - saw thunderstorms and downpours; today, is apparently cloudy, with a maximum of about 25 degrees (the photographs were taken about twenty minutes ago, and show a somewhat different story,  with a  temperature way up in the thirties...too hot to be doing anything other than a little light pruning,in the shade, and definitely not the serious hoeing I had in mind). 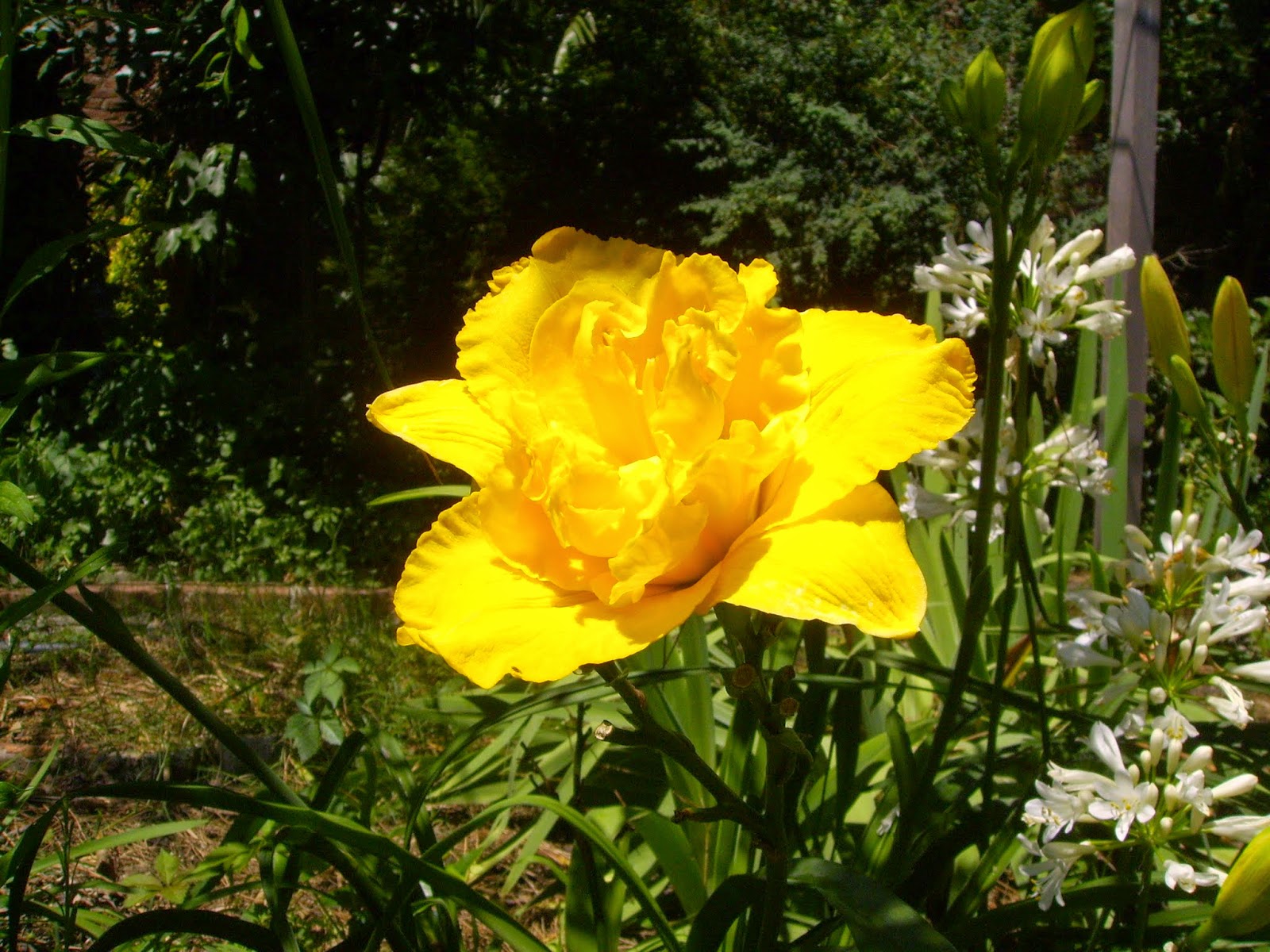 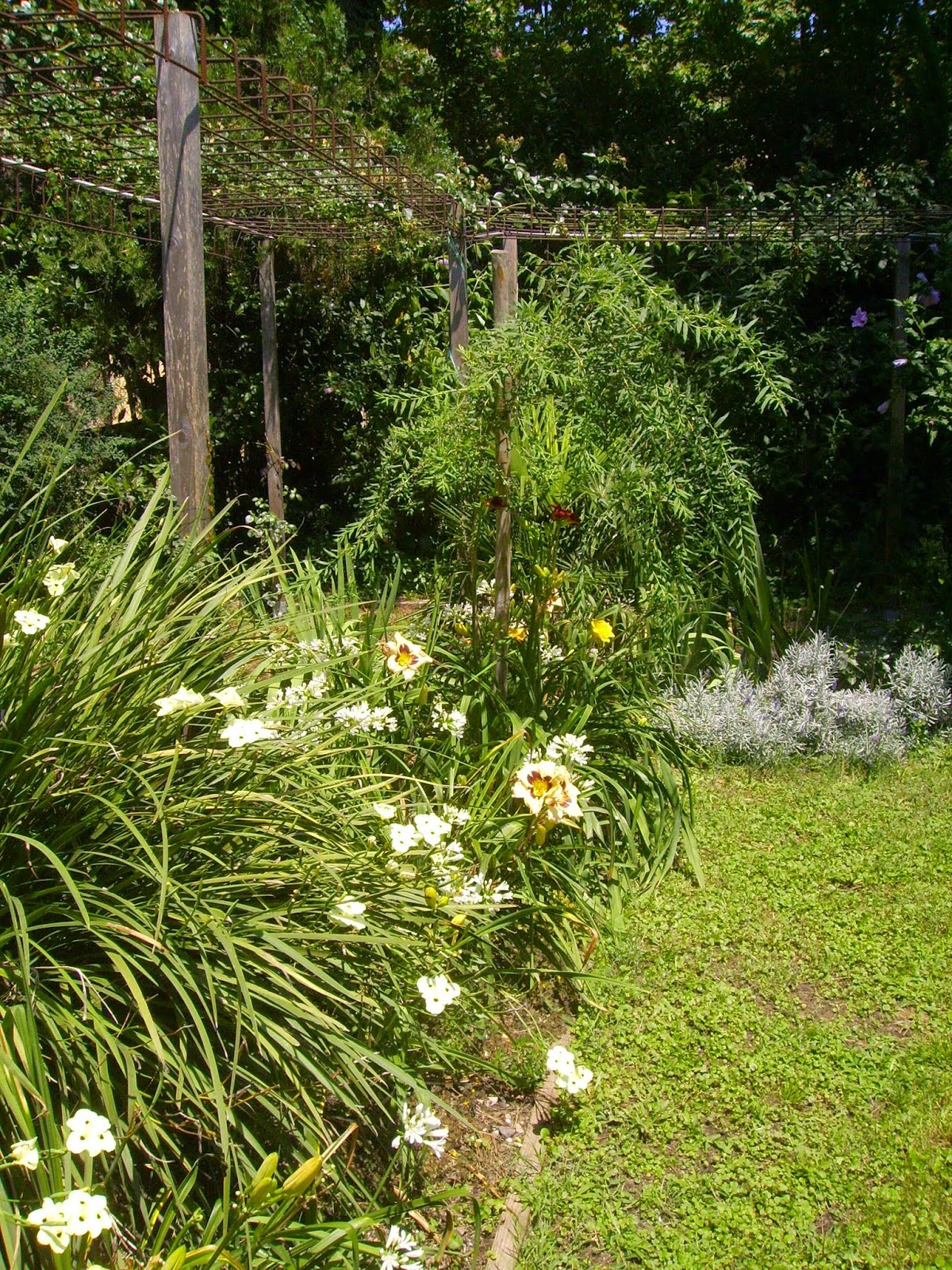 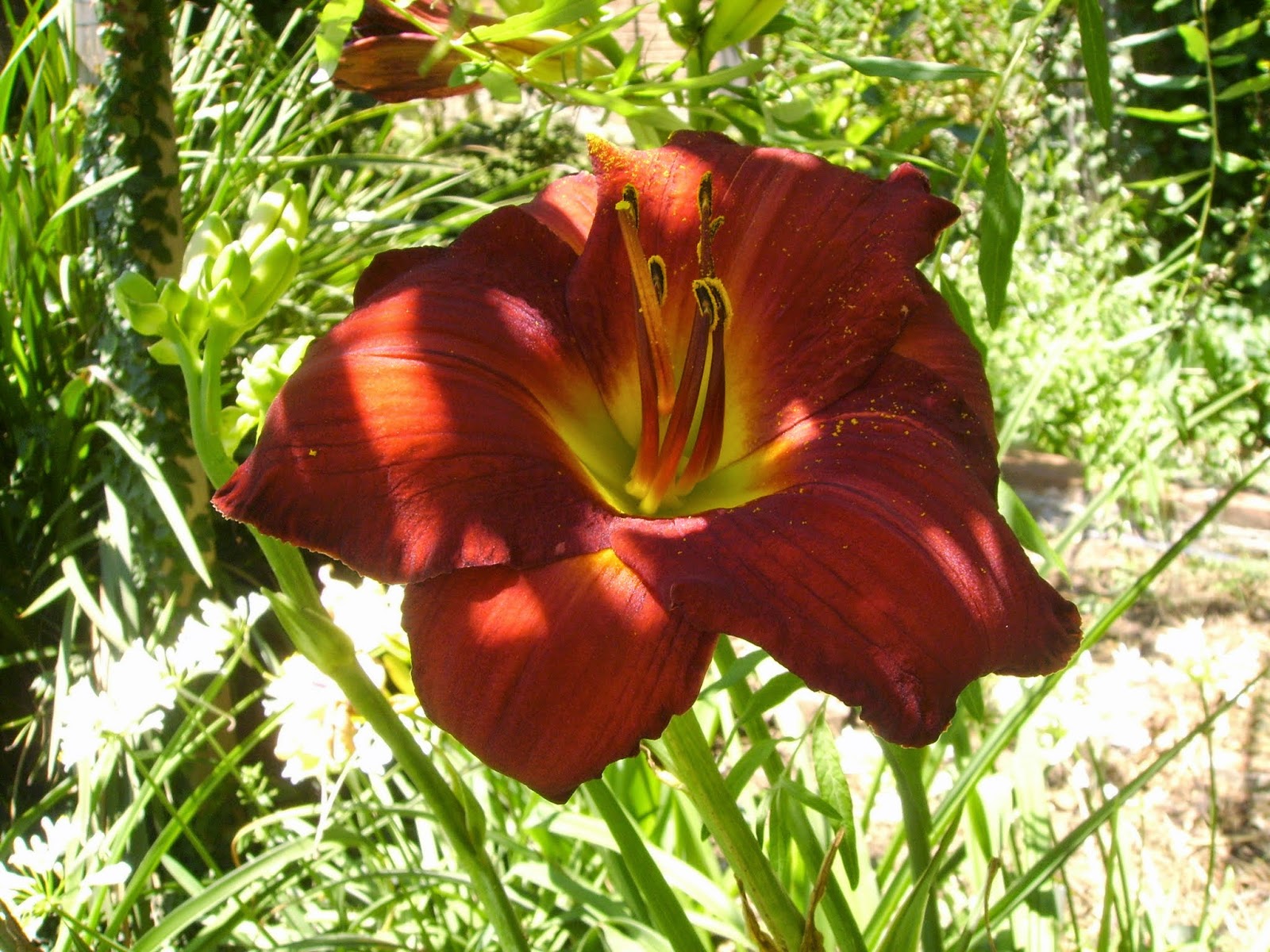 The mallows are in bloom - and will flower now through  until the end of the summer - and the hemerocallis are showing their colours in staggered glory. The roses are getting into their stride for their second flowering of the year (apart from the climbers, some of which will favour us with the occasional flower, from time to time, but they won't repeat their earlier magnificence again until next year). 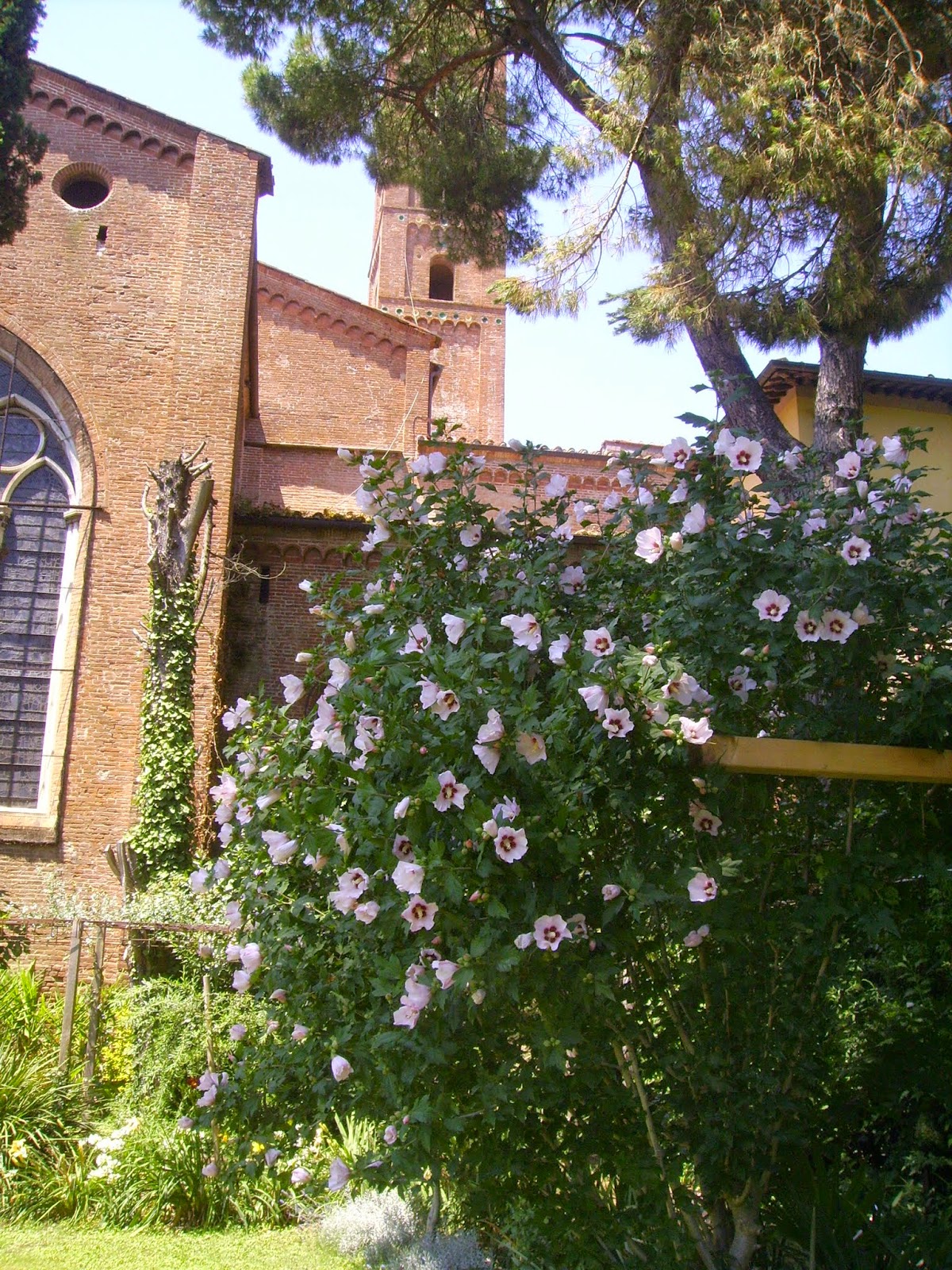 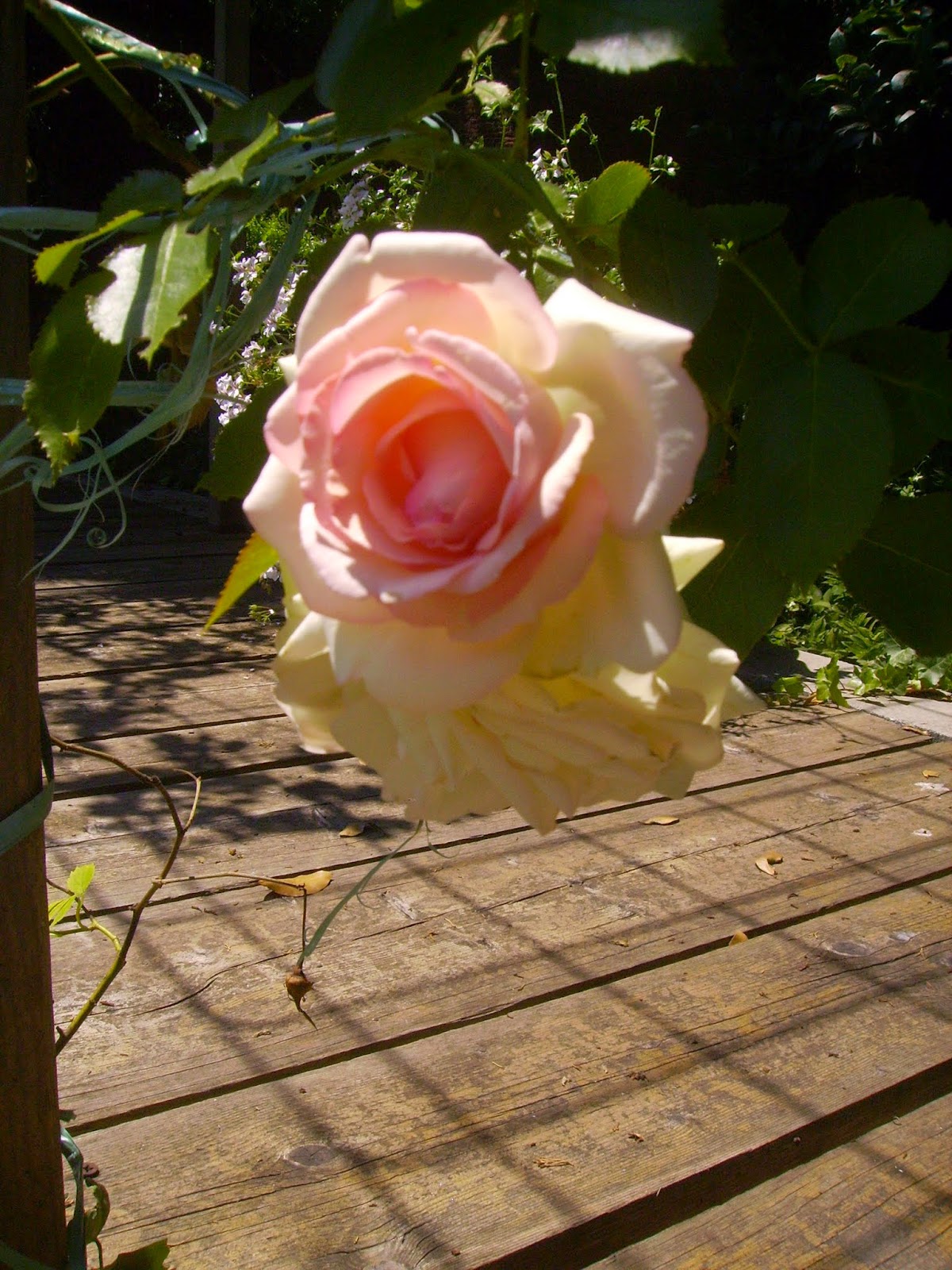 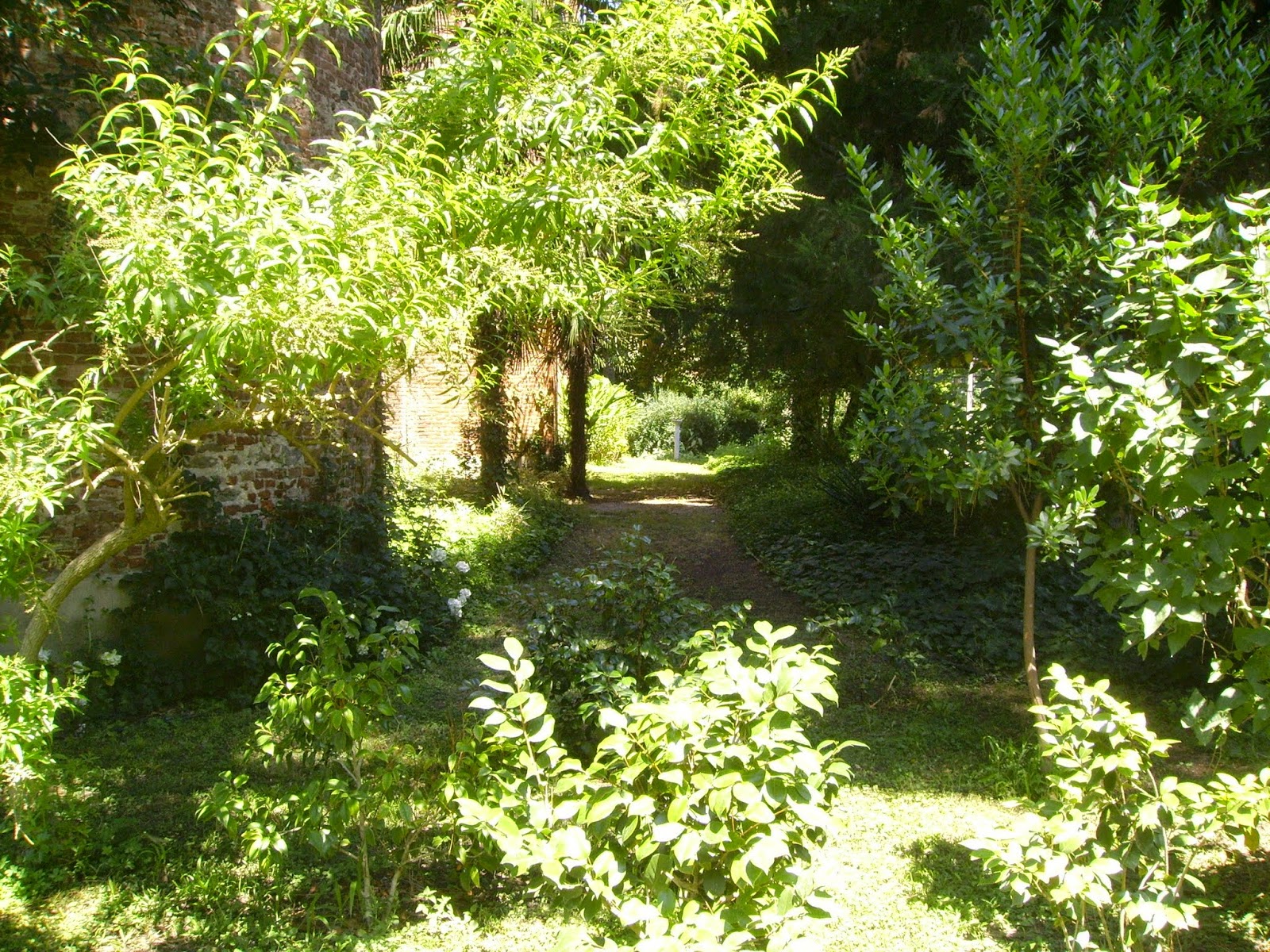 Tulbargias and agapanthus are also coming on strongly, and as the arborescens and quercifoglia hydrangeas start to show signs of fading, the macrophyllas are still doing well, and buds on the paniculatas are gathering strength. 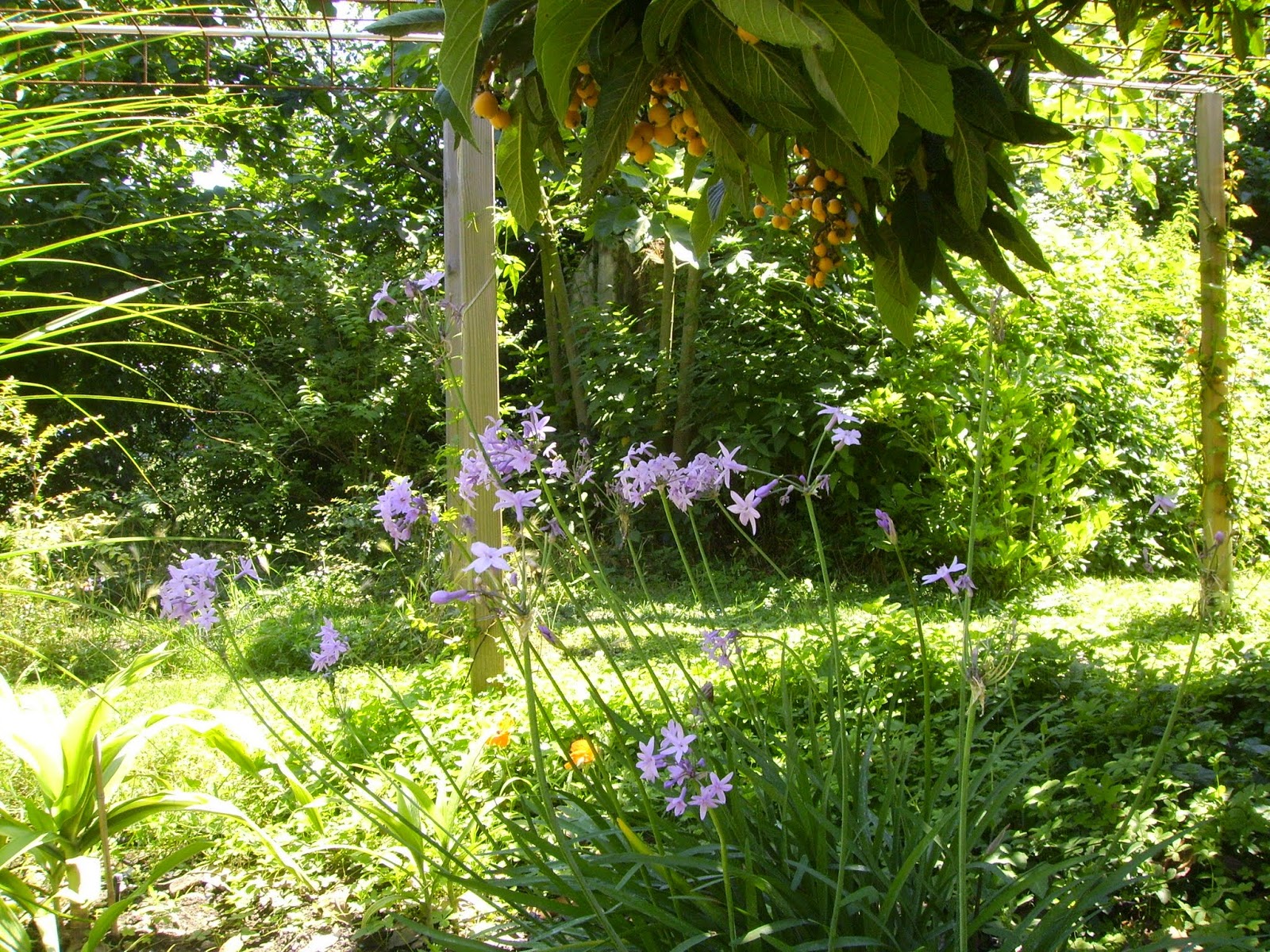 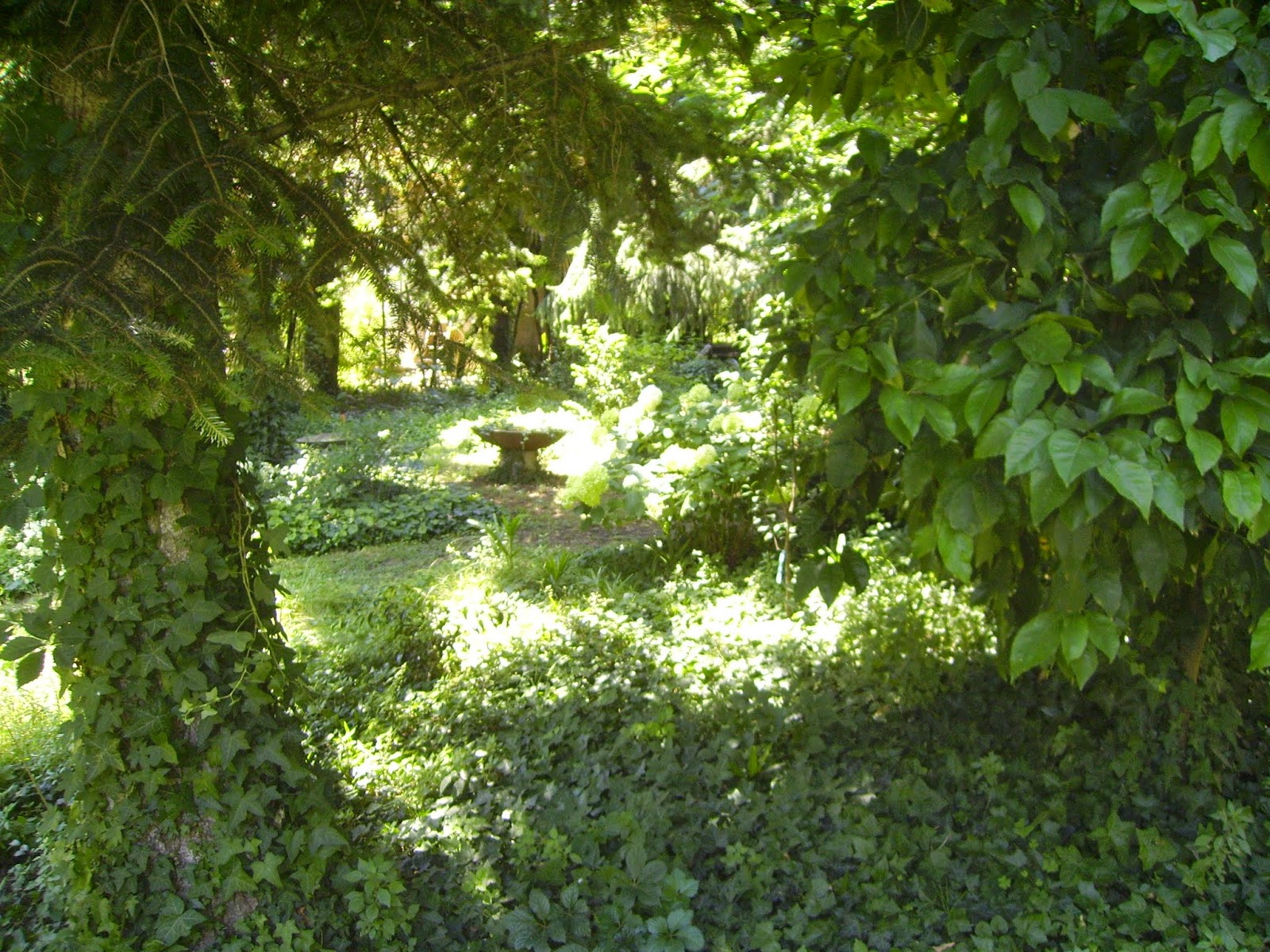 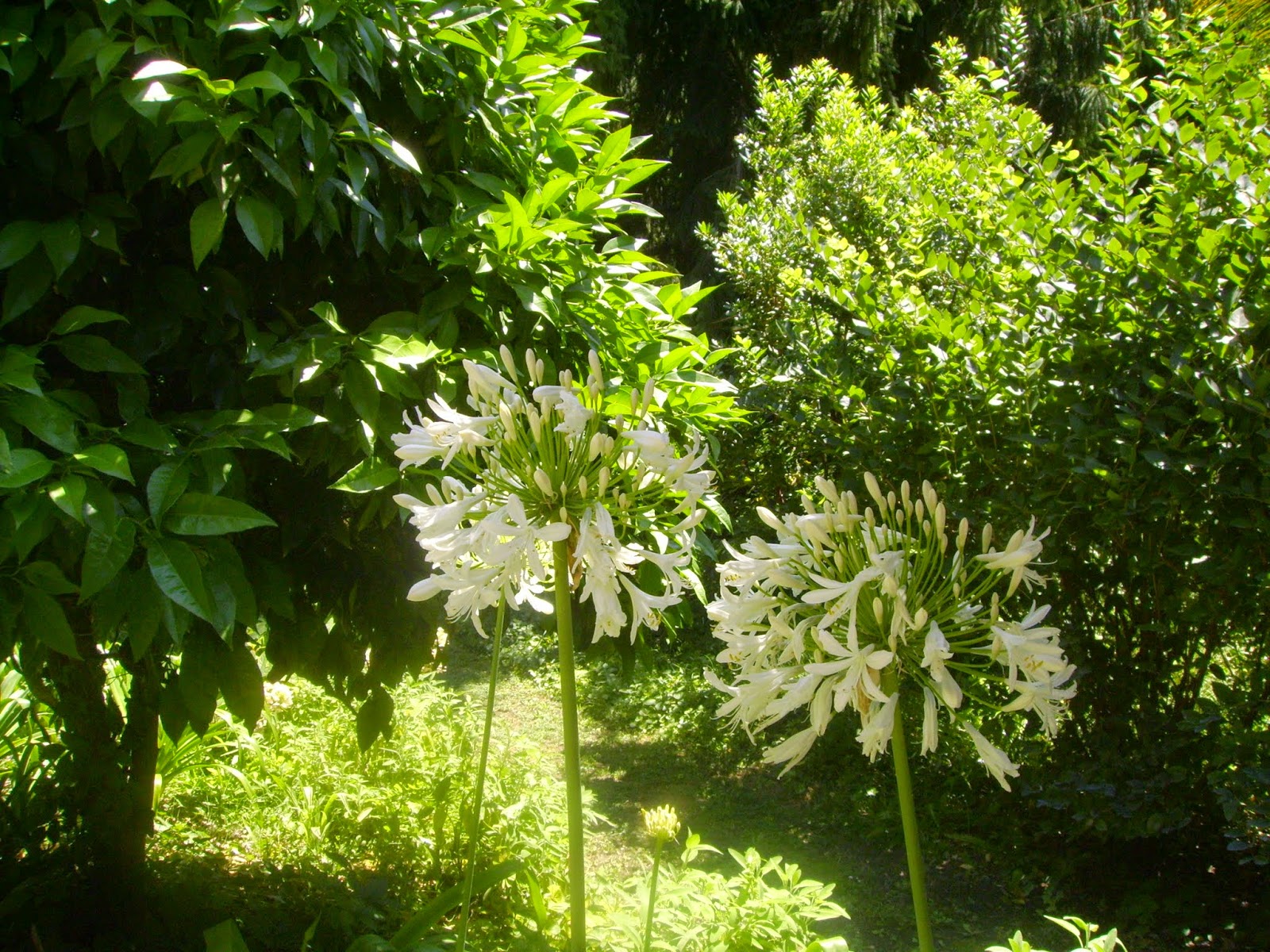 And, as ever, we have an eu-sized fruit glut. The red plum tree is almost done, having furnished fruit for jam (around ten kilos), tarts, sorbet, consumed with yoghurt, and given to friends; the yellow plum tree is groaning beneath the industrial quantities of large, succulent fruit (which we haven't even started to pick, yet); we've just picked the nectarines, which will keep us going for quite some time; fortunately, the remaining peach tree is a late-fruiter, so we have a bit of a breather before that has to be dealt with, but in the meantime the fig trees (both purple and green) will be ready....as will the pear trees, and the apples soon after that. The quinces are a whole other issue - but one where I can happily leave the fruit on the trees until well into the autumn. And then, of course, there are the almond trees and the hazelnuts...which are wondeful in theory, but where dealing with the shells is a whole different kind of challenge. 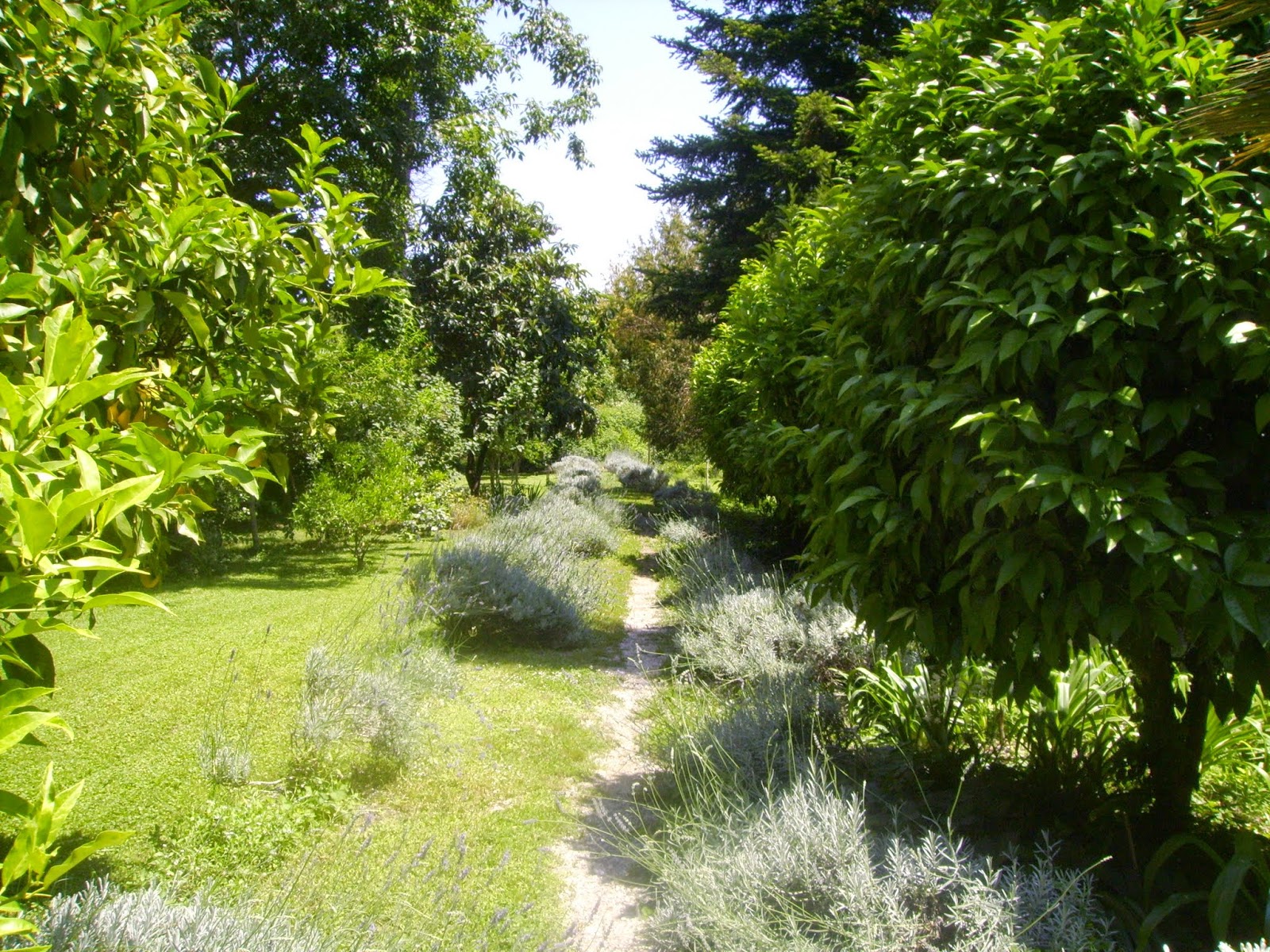 Oh, well. There are plenty worse problems to have than that. And for now, I think an undemanding wielding of the seccateurs on the roses around the upper terrace, and then a refreshing glass of white wine before siesta beckons...

Rabbit in white wine and celery; fennel in cream and pernod.

Hello Pomiane, only just catching up with your news. It's been a blog-free zone around here for several weeks. Lovely to see your garden and how beautiful it's looking. I've been really grateful for all our thunderstorms this wet July. It means I've had to do far less watering than normal and the water butts stay topped up when I need them. We too have a lovely yellow plum. Sadly it has some sort of rot, so only a few of the fruit are ever edible.

I've been grateful for the unseasonable rain, too, up to a point - but I think the point has now been reached! The wells are so full, I need have no fear for the garden, if were it not now to rain before the middle of September. What I would welcome now would be several weeks of unbroken sunshine, and waking up every morning to clear blue skies and reliably fine weather...