Glorious weather. Back to planting, again, after a two week hiatus, firstly from being poleaxed with a lousy cold - which Paola seems confident was actually flu...but then isn't every sore throat categorised as 'flu', these days? - and then because of the visit to Venice. 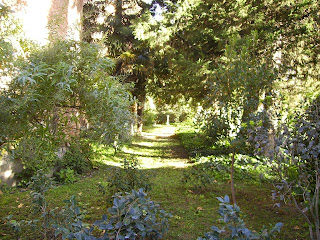 Still much to do, following the great plant raid from Pistoia, several weeks ago. The arborescens are all planted in the old orchard, as are all the new roses, a solanum has been positioned to grow over the roof of the well-house, a new magnolia stellata beside the romitorio, and a vanille-fraise paniculata, to replace the quercifolias which I rather ruthlessly transplanted about a month ago, to a sunnier spot beyond the pine trees. The latter spent some time considering their options, but have now decided that they are happy after all in their new position, and have settled down perfectly well. Yesterday, I moved a philadelphus, which was too close to where I have to extend the south-east pergola bed, in order to plant a cistus florentinus, and after that, the south-west pergola bed also has to be extended, for a serrata santiago, as well as a couple of other things I want to move there from beside the entrance walkway. If I get my act together, I hope to plant another 100 narcissus bulbs, this afternoon, as well as a couple of petiolaris, to go on the back of the church, and possibly also make a start on the 36 dwarf bamboo (of various kinds) which we're putting in as underplanting in the wooded parts of the garden. 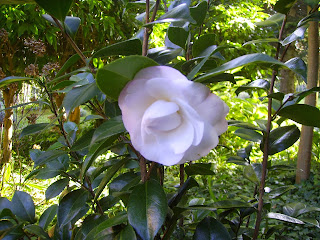 The first camellia bloom has appeared: "Destiny". It was the first to flower last winter, too, and then continued in flower right through until April. The other camellias are all heavy with buds, and promise well, but with most of them unlikely to bloom this side of Christmas. Other than that, there are a few roses flowering in a desultory fashion around the place - Parole; Anna Livia; Iceberg; Anna Pavlova; Westerland - but I can already feel my fingers itching to reach for the seccateurs, to give the roses their annual heavy pruning. 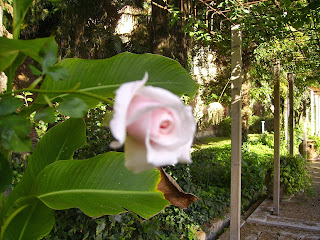 And the strawberry trees, which have had a major growth spurt over the summer, are covered in white blossom - I hope, as a precursor to a decent display of 'fruit'.
The four-footed is delighted that gardening is back on the agenda - he was very understanding and sympathetic when I was suffering, but has been noticeably suffering himself from cabin-fever, more recently, especially when we came back from Venice, and then had two days of solid rain. 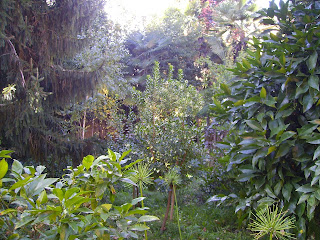 In fact, I can sense he thinks it's time to get on with it, right now!

Oh Pomiane, I so envy you! The weather here has been lousy - rain, rain and more rain - not called Aquitaine for nothing! So even when it stops, our clay is so claggy I can barely lift the muddy lump that comes up with the fork. I've stacks of cannas that are taking over to split and transplant before it get too cold. At this rate they won't get done until next spring. Itching to get out there, I've bulbs to plant too, but it's raining again! Your garden sounds stunning.

Ah, but that's because you only get the edited highlights - I make no mention of the fruit cage, which collapsed in the snow two winters ago, and has been limping along since then in a disreputable state, awaiting a complete re-build...