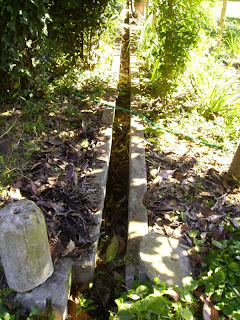 are  the theme of the moment. I've spent two mornings this week - from seven to nine, since it is too hot now to do anything later in the day than that - clearing out the weeds from what we poetically call the 'rhyll', which runs along two sides of the North Lawn, before it disappears into the confusion of undergrowth beneath the pine trees. In fact, it's a brick-lined channel, almost a foot deep, and half as wide, which starts out at the huge old well in the NW corner of the garden, and then runs gently downhill for its entire course. We think it was probably intended to replenish the level in the well beside the house, as necessary, from the water supply in the older and larger well - which is so plentiful that it appears in its own right on some old maps of Pisa, and which hardly shows any drop in level even at the end of a long, hot, rainless summer, when we've daily been throwing hundreds of gallons of water from it over all parts of the garden. The system was probably multi-functional, since there are slots in the rhyll, in places, for little sluice gates - which suggest that it was used also as a watering system, during the period when the garden here was still monastery farmland. I suppose it could be seventeeth century - going by the date of the house and of the smaller well - although I doubt that style of brickwork changed much over many hundreds of years, so it's quite hard to date with any accuracy. The Technical Dept is keen to use it in anger as some kind of water feature (we've tested it, and it holds water perfectly efficiently), and I can see it could be quite dramatic if we filled it with water and had half a dozen small fountains placed periodically along its length. Watch this space... 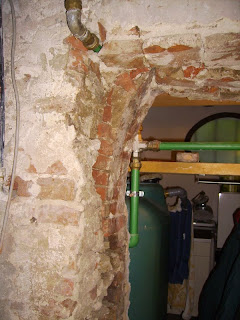 And the other bricks are the ones I've been dealing with as part of the process of reclaiming our cantina, which the previous generation of neighbours 'borrowed' (without asking) about a dozen years ago from our predecessor here, and which - since the current neighbours appear somewhat shamefacedly to have abandoned - we have decided to re-annexe. Having identified where (logic suggested)  the old doorway must have been, from the back of the laundry room, conveniently positioned between the boiler and the autoclave, I set to, with great enthusiasm and a large hammer, about a week ago - and was encouraged almost immediately to discover the vertical edge of an old doorway, which meant I was exactly on-track. It was only with the gradual discovery that the wall I was removing was not the sort of neat bricklaying of the late twentieth century, however, but that it also included large (and I mean 'large') chunks of dressed stone, that I realised that the infill I was removing was from several hundred years earlier than I'd thought. And then, I discovered the start of a graceful arch at the top of my vertical door edge - and immediately recognised it as part of the run of arches which are so perfectly preserved further along in the house, incorporated into the dining-room wall. And which also 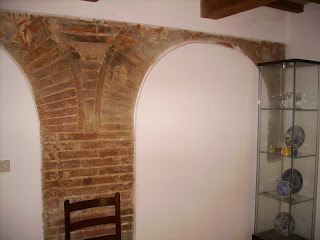 appear as a second run of arches on the floor above, where three of them can be seen, forming part of the back wall to the courtyard terrace. The arches are part of the original thirteenth century church, which were incorporated into the structure of this house after the fire in 1650, when this section of the church wasn't re-built but was instead re-cycled to make a farmhouse for the factor of the monastery farm. The same explanation lies behind the ruined and truncated vaulted ceilings which now form alcoves in the courtyard - but which must once have been side-chapels in the church - and the great arched doorway which can be seen partly in the courtyard and partly in the dining room - with the top half concealed behind the plaster in the bedroom above - and which must originally have given access to the church interior, via the Martyrs' Chapel, which is still on the other side of the dining-room wall. 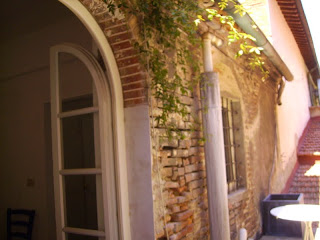 I imagine that before the fire, the arches were part of a two-storey loggia, or open corridor, which looked over the south side of the church, and probably, during the time when Thomas Aquinas would have been here, gave access to monks' cells and administrative offices where we now have the kitchen and salone. What a relief that I didn't start wielding my hammer six inches further to the right!

Peach Tart - made with white peaches from the tree which Sarah gave us from Wisley.