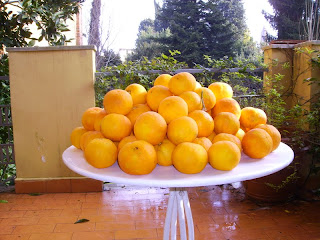 The four-footed gazes blankly, with philosophical resignation, curled up on his bed in the tinello, as the rain beats drearily down outside. Not a day for running around and endlessly presenting tennis balls or pine cones to be thrown for him to chase. He's very good about it...even if the door is opened for him, just in case he has a pressing urge to go and ease springs, he lowers his head and peers thoughtfully at the weather, before looking up to indicate that actually, all things considered, it's probably a better idea to stay inside in the warm. He's right.

Olga bangs around with a floor polisher, while Radio Tbilisi (which we try and remember to put on when she's here, to make her feel more loved and therefore less likely to find other and more congenial work elsewhere) drones in the background. The Technical Department has gone to explain to the Cairoli amminstratore where he's gone wrong in calculating condominial charges for the past three years (for example, that the condomini have been charged forty euros a week, apparently since the beginning of time, for a condominial cleaner who doesn't exist!). Lentil soup simmers aromatically on the stove, and I contemplate both the chapters of Orgoglio e Pregiudizio I need to prepare in advance of this evening's

italian conversazione, and the thought that I could provide crepes, along with Ms Austen's finest, in honour of today being Shrove Tuesday - and in return for the Pauli's offering last week of not one but two different kinds of zeppole (a kind of deep-fried small doughnut, light as love, filled with flavoured cream and drenched in sugar; Paola claims they're carnevale fare, although further investigation says they're related to the feast of San Giuseppe, which isn't until March 19th. I suspect the carnevale angle is merely an excuse to start eating the things much earlier in the year ....if any excuse is acually needed).

Fettucine, with fried zucchine and parmesan

Strawberry Bread & Butter Pudding, made with panettone left over from Christmas.

Panettone left over from Christmas! You mean, our left-overs re-re-re-heated?

Clearly, you haven't been taking your pills! 'We' (including you) didn't have any panettone at Christmas; we, however, still have one, as yet unopened, that Olga gave us to mark non-georgian Christmas (in return, she was given a Christmas Pudding, about which no comment has ever been made). Fortunately (in one respect), commercially made panettone is essentially indestructible, and never goes off, and would possibly survive the apocalypse, and therefore a delay in consumption of a mere two months is nothing to worry about.

I do understand Olga's reluctance to comment on your Xmas pud: I have often noticed the same reaction in other foreign guests when words fail to describe the enormity.

No, Judith...YOU are the only person who does not like Christmas Pudding. The Pauli were positively ecstatic when we gave them one, which they served to their extended family on Christmas Day. Don't project.

So polite, the Pauli. And clever, too: the whole extended family debagged in one fell swoop without leaving incriminating evidence.