Too much of a good thing. 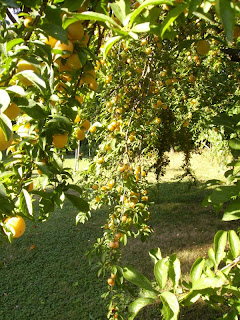 Plums.
Again.
I whinged about them last year, I know...and somebody helpfully suggested making jam. So I did. My grandmother's preserving pan has seen sterling use this year, what with marmalade, strawberry jam, apricot jam, nespole jam (loquat, in English; Jane Grigson is quite understandably lukewarm about this fruit, but it's another one which the italians love...cf. cachi), and ...plum jam. In fact, the plum jam has been the least of it, so far....since the apricot harvest has also been phenomenal, and indeed yesterday I made yet another five kilos of apricot jam - which is quite delicious, and for the first time I can understand why it was that apricot jam played such a prominent role in french patisserie...not to mention stalwarts of other cuisines such as sachertorte, of course. 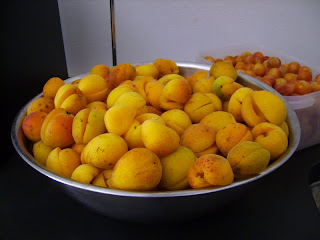 The apricot jam will find many good uses, in the course of the year. The industrial quantities of plum jam, I'm less sure about; not least since we have foresworn bread (unless there are houseguests, when toast makes a miraculous reappearance at breakfast...) and cakes only appear on highdays and holidays. At this rate, our plum jam mountain will reach EU proportions; maybe Brussels could think of a way of using it as a means of addressing the eurozone crisis? 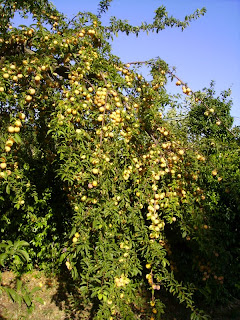 The weather continues glorious...apart from an unexpected flurry of raindrops in the middle of dinner the other night, we've seen no rain for about six weeks now; which I would be sighing about, were it not for the almost-completed installation of the  watering system. The pop-up sprinklers in the lawn work magnificantly, and create jets d'eau to rival Versailles! I've just about got to the stage where I no longer stand and watch them, mesmerised by the action, and rejoicing in the result; the senior four-footed is entirely sanguine about their arrival, and the junior four-footed goes and sticks his head in them as they go round, and generally gets soaked - which at least removes the need to dump him in the bath from time to time, and remove from him the bits of garden with which he manages to festoon himself every time he's out there. 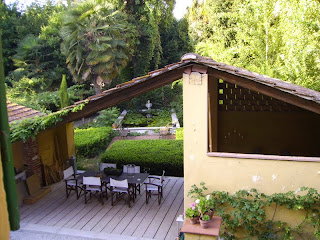 Mornings dawn bright and sunny, with clear skies, and the promise of much heat. If I manage to, I get an hour or so of gardening done before 9.30.....and on the mornings when I am up and gardening at 7.30, it is a wonderful time of day, with the early sun, and everything still fresh. Poleaxed by the heat, we sleep in the afternoon, and dinner tends not to be until about 10.00, by which time the evening air is like cool spring water. It's a toss-up whether I take my laptop to the barn, and work out there during the day - but have to bring the computer  back in if I want to print something out - or else sit in air-conditioned cool in the office, and merely glimpse the sunshine through the closed french windows. 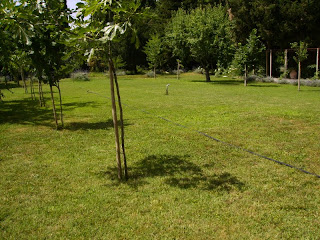 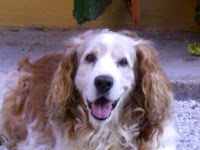 Not a good period for cooking: too hot during the day to want to spend time in the kitchen, and too many things to do in the garden once the sun starts to descend, and it becomes possible to hack and slash and weed. The only recent discoveries were two excellent sorbet recipes: strawberry sorbet, made with 300g of fresh strawberry purée, churned with 220ml sugar syrup (made by bringing a litre of water to the boil with a kilo of sugar, then keep it cold in the fridge and use as needed over the following weeks) and the juice of half a lemon...when made with fresh purée, the flavour is an absolute revelation, but I tried it the other day with some purée which had been frozen for a couple of weeks and the result was disappointing - it tasted like generic 'red fruit', and had lost all of the edginess of wonderful strawberry flavour; and Apricot sorbet, which requires 500g of halved and pitted apricots to be poached for ten minutes in 400ml of sugar syrup, then allowed to cool, liquidized and churned...the result is the creamiest, smoothest sorbet imaginable! 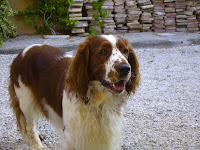 Tonight's dinner (post airport, as the TD is flying back from London this evening)

Risotto of limoncino and parmesan.

Vanilla ice cream, with balsamic strawberries.
Posted by Pomiane at 09:37

You could also use the Apricot jam on natural yoghurt - if you eat that of course. Or on Porridge. Forsworn bread - how do you manage that -in Italy?

Eat it? The TD makes it in industrial quantities every third day. We practically live on the stuff! Foreswearing bread in Italy is easy, as long as one only eats at home. The rule is waived every time we're in a restaurant...it's like broken biscuits having no calories, due to calorie-seepage, and all food consumed in a cinema being dietarily-sound, since it's been covered off as part of the entertainment package.