Autumn is upon us 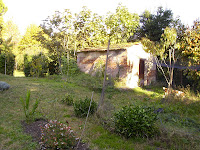 Glorious, mellow sunny days. The garden rich with the deep colours of parthenocissus, drooping in great swathes from the branches of the cypresses, and in curtains hanging down from gutters and wires. Doors and windows are left strategically open in the course of the day, but firmly closed by nightfall, and the evening air is crisp and now carries with it the unmistakeable smell of woodsmoke. 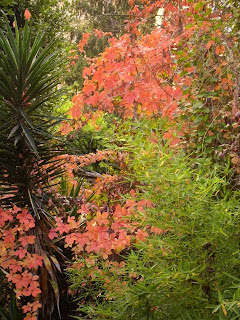 The winter gardening timetable has begun, now that the days are cooler, and the endless hours spent watering in summer can be devoted instead to more productive tasks. I've just completed the first tranche of bulb-planting....crocuses, and pushkinia, narcissus, bluebells, aconites, muscari, nerine, cyclamen, alliums, and snowdrops. The tulips will have to wait until the end of the month, when I should also have the new climbing roses to plant on the north pergola, as well as some more ground-cover roses to go in amongst the camellias. We've added another dozen azaleas to those already lining the entrance walkway, and all of the rododendrons have been moved from behind the church, where they got far too much sun and struggled in the summer heat, to the welcoming shade beneath the palm trees and pines at the southern edge of the woodland area. 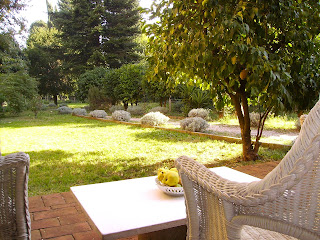 The quince harvest is pretty much finished, the cachi trees are heavy with fruit (industrial quantities of the stuff, and since we don't have a taste for them, the Pauli - and all of their friends and relations, and indeed anybody else they can think of  -  have been invited to come and pick), and the blossom on the nespole is hosting an impressive display of pollinating activity from bees. The orange and lemon crops are coming on well - just now beginning to swell and to take on some colour - and even the bitter orange crop in January should be pretty good. 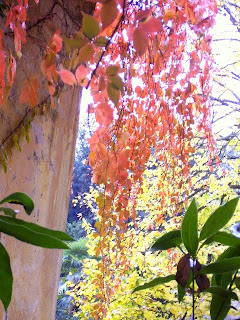 Since the clocks have changed (much to the confusion of the four-footeds and their dinner hour, for which they work on God's time, and they've been much put out since they still haven't entirely adjusted to the change ) it's dark by five-ish, which means gardening is forced to finish for the day, and a great deal more time is available once more to be devoted to dinner. Generally after a welcome soak in a hot bath for half an hour, accompanied by a glass of prosecco and an improving book; I'm just finishing a deeply irritating work on the design of early Medici gardens, by somebody called Rafaella Fabiani Giannetto - lots of interesting information that she uses to support an extremely stupid thesis....Oh, well. 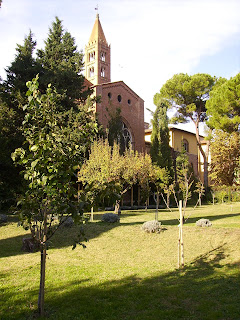 I've also been working through Joel Robuchon's recently published 'Complete', which I can't recommend highly enough. A lifetime's experience at the rockface distilled into a treasure trove of splendidly practical recipes. To-date, I've tried his version of pintade au chou (twice, in fact!);  rabbit roast in mustard, with a cream sauce; clams & mussels in curry-flavoured cream; courgettes, sautéed with mushrooms and broad beans; and a tart of tomatoes and peppers, about which the Technical Department hasn't stopped raving ever since! 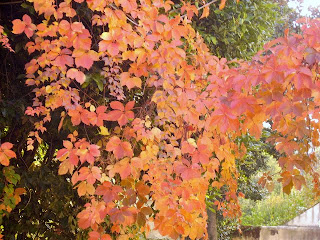 And now, since the sun is streaming in, I think I'd better make the most of it and finish demolishing the oldest of the compost heaps, to be used as top-dressing round all of the hydrangeas. The forecast is for days of rain as from tomorrow... 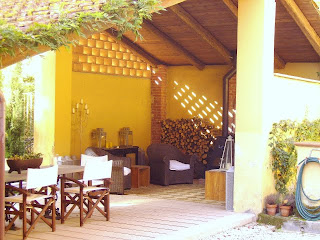 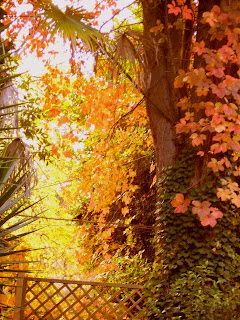 Fond d'artichauts, stuffed with Foie Gras, in  a Mushroom sauce

Fresh Pineapple
Posted by Pomiane at 11:07

The autumn colours in your garden are beautiful. We're having our "days of rain" thank goodness! Our tree and shrub planting will hopefully start next week once the soil has had a good soak.

And our wet days arrived exactly as promised. On Friday night the rain drummed on the roof like arillery, and yesterday evening, with friends to dinner, we had drinks beforehand in the barn, round the fire, and ended up marooned and umbrella-less as yet another downpour cut us off from the house!