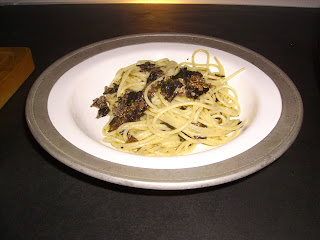 It wouldn't happen in London. The San Lorenzo's dropped in for a cup of tea, a couple of days ago, and at the same time handed over some black truffles that somebody had given them, and which they thought we could put to good use. (Paolo seems to have grateful ex-patients the World over, and the S-L's generally have some exotic form of comestible blocking up their hallway - a case of verdelli just arrived from Sicily, for example, or  a cool-box with melt-in-the-mouth mozzarella sent from Naples, or a package of spicy 'nduja from Puglia...)
Best not mucked around with, the truffles went in their entirety into two servings of Spaghettini alla Nursina as a starter for dinner, last night - 40 grammes was just about enough. Sliced wafer-thin, and then cut crosswise into the most delicate of julienne, they were doused in olive oil, and left to sit, macerating gently along with two or three finely sliced basil leaves. Mixed with a light anchovy sauce just before being added to the al-dente spaghettini, the result was perfect!
And not about to be repeated any time soon, either - not unless we win the jackpot, or the four-footeds suddenly become useful and discover truffles growing in the orchard!
Tonight's Dinner:
Funghi Porcini Tarts, in Polenta Crust.
Hamburgers, with braised Celery.
Apples baked in cream, with Brown Sugar and Cinnamon.
Posted by Pomiane at 17:57

I think it fair to say that I am truly dribbling at that description.