With only pause to take breath and change baggage in Pisa, on Saturday, we were off the plane from London and on the road to Belforte practically seamlessly. Sunday was a zero birthday for She-who-must-be-obeyed in Belforte, and a commemorative trip had been especially organised for a private viewing of a painted etruscan tomb at Sarteano, which was rediscovered only about five years ago. The weather, of course, was filthy, and on Saturday evening the cross-country route to Belforte took much longer than usual, as rain lashed down and the windscreen wipers struggled at times to keep pace. Although, I suppose the fury of the weather outside only increased the home-and-hearth sense of wellbeing, as we dined beside the blazing kitchen fire, on beautifully tender roast lamb, washed down with some hearty burgundy that wasn't quite also celebrating a zero birthday, but was still doing pretty well!

More rain on Sunday, as we made the journey across from Siena to join the Autostrada del sole (hollow laughter) and then down to Chiusi, from where it's just a short climb up to Sarteano. The hill towns in that area were shrouded in low cloud, and the rain had diminished to a steady constant drizzle by the time we'd finally arrived: dreech, I think the Scots call it.

To re-charge batteries before the cultural event of the afternoon, we lunched at the Trattoria di Merlo in Cetona, a pretty little town, but one which I can

imagine in summer is absolutely heaving with tourists, and only to be recommended out of season. In the screen version, lunch would of course have been memorably wonderful - but in fact, it was rather disappointing. There was more enthusiasm than skill in the kitchen, and the menu largely comprised dishes that aimed at edgy creativity, but where in fact two plus two ended up being merely a rather unexciting four. Oh, well...

And the tomb. We were met in the middle of a damp and misty olive grove by one of the lo

cal archaeologists, who led us down a muddy path, and past the openings to numerous other tombs, en route to what is the only frescoed tomb in that particular necropolis. Through a locked door, and down a dripping sandstone tunnel, we were met by an astonishing sight: walls bright with the mineral colours of paint, exactly as they would have looked when they were painted nearly twenty-fiv

e hundred years ago. A large hipocamp, and an enormous three-headed serpent; diners at a banquet (presumably, the occupants of the alabaster sarcophagus in the main tomb chamber); and a dramatic image of Charon charging off to the underworld, in a chariot pulled by gryphons and lions, surrounded darkly by an enveloping black nimbus. Stunning! Completely wonderful!
Although

visitors are normally whisked in and out for only a couple of minutes at a time, in order for their breath not to damage the fragile paintwork, we ended up staying for the best part of an hour - probably because of SWMBO's archaeological credentials - and drank in every last detail. And we emerged eventually to the same damp olive trees that must have been familiar to the builders of the tomb, all that time ago, leaves dripping heavily onto the grass beneath, and the leaden mist obscuring the lower slopes of the grove, further down the hill.

After an hour spent in the otherwise deserted museum, back up in Sarteano itself, we set off for Sorano, some distance to the south-west, where dinner and a hotel had been organised - although, in fact, we almost didn't make it. The heavens opened once more, and at Castel Giorgio we were turned back by flood waters, and sent off by the local carabinieri into the great unknown...more precisely, in the direction of San Lorenzo Nuovo, where the floods didn't have any carabinieri attached to them, and we suddenly found ourselves, in the middle of dark countryside, ploughing through water about a foot deep, and several hundred yards long. Much more of it, and we'd be there still!

As it was, we eventually - somehow - made it to Sorano, and trudged through narrow, steeply-sloping cobbled streets to the hotel (designed for high summer, we were the only guests, and the off-season chill was less than optimal) and thence to the Trattoria Aldobrandeschi for a very good dinner. Blazing fire, an excellent prosecco, a profusion of white truffles (with tagliatelle), meltingly-delicious guanciale, and a grappa from Friuli that was one of the best I've ever tasted.
We wer

e the only diners, and in fact the town itself was pretty much shut up for the winter - the houses, these days, are largely second homes for Romans (Rome is only ninety minutes to the south), as well as lots of Dutch, and Swiss, and Danish (according to mine host). On the one hand, it saves the place from falling to pieces, but at the same time, renders it rather lifeless - I suppos 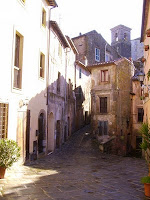 e there isn't a perfect answer.

Rain throughout the night, and then we woke to cloudless skies, and brilliant sunshine. Perfect to wander through the town, emerging occasionally from the labyrinthine streets to glorious views across the ravine beneath the town, looking across to the wooded slopes beyond, all rich in autumn colours. Warm enough for a last cappuccino, consumed as we sat outside the cafe in the main square...and then it was time to hit the road...

Coffee Meringue Nests with Ice Cream and fresh Raspberries (the garden is still producing, quite generously)
Posted by Pomiane at 08:36

You do have adventures, don't you? The tomb sounds stunning, the pictures have certainly piqued my curiosity.