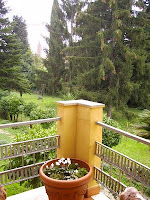 On and on. Fairly typically for November in Tuscany, it has to be said, and the garden looks very happy for it. Lush and green and soaking. Fortunately not so sodden that I couldn't plant several hundred bulbs in the few rain-free interludes we've had in the past couple of weeks (a couple of hundred narcissus to line the grass walk under the pine trees, to the north of which I've planted two hundred mixed alliums, around the hydrangeas; and hundreds of dwarf irises under the silver birch and on either side of the causeway that leads to the romitorio.) I even managed to cut the grass (all of it - having realised from the forecast that it would be my last opportunity for weeks) on Wednesday, and it looks agreeably soft and well-behaved as a result. 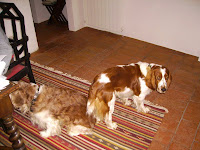 And so, we're largely housebound, either watching the rain through the windows, or else listening to it thundering overhead in the watches of the night. The four-footeds have got over their frustration at the doors to the garden no longer being left open all the time, and in fact are developing a fondness for soft furnishing, which requires constant vigilance to prevent the senior four-footed from curling up on one or other of the new sofas (which he's prone to do at the first opportunity).

It's our first winter actually living in this house - last year, it was a building site right through until April - and it turns out to be agreeably warm and cosy. The Technical Dept is pondering a construction of gla 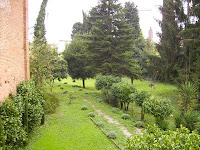 ss screens to enclose part of the sitting-room terrace; you'd think it would be for our convenience, as a winter sun room...but, in fact, it's because he thinks the four-footeds would appreciate an indoor vantage point from which to monitor the entrance pergola (this is the man, after all, who considered raising the china cabinets on blocks, years ago, when the previous senior four-footed was a puppy, and was dismayed when he grew too much to be able to tunnel excitedly beneath the cabinets, which had been his favourite game when he was very small!).

I'm in the middle of Miles Unger's hagiographic biography of Lorenzo the Magnificent, in between bouts of painting skirting boards (where the brazilians managed to smear them with floor grout), and the Technical Dept is doing...I don't know, really....technical things.

Crespelle, filled with ricotta and bietole, in a parmesan bechamel sauce

Pork loin, pot-roast in milk; roast celeriac. (The four-footeds are having sausages, as a special treat in honour of the senior four-footed's eleventh birthday)

Apple sorbet.
Posted by Pomiane at 08:20

You have been busy in the garden, I hope your back is not hurting. What a lovely thing to look forward to in spring.

Funny that you should mention the back. There have been one or two twinges, in fact.
The problem with all this wet weather, though, is the temptation of online shopping - as a result of which, I now have a shipment of several (more) hundred bluebell and pushkinia bulbs heading this way. February and March should be splendid!

I hope for full colour pictures in spring...