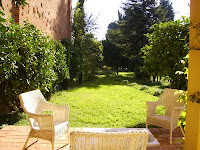 Glorious days of golden sunshine, still warm enough to sit on the terrace for morning coffee, and to work in shirt-sleeves in the garden...but definitely cold enough at night that all the doors and windows are closed after sundown, and the four-footeds find the floor tiles too cold for them to sleep on in comfort. Which has led to some confused incidents when both of them have decided to jump onto the bed in the middle of the night at the same time, 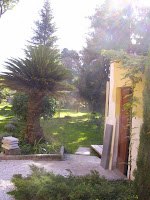 and then become noisily territorial as they both tell the other one to eff off, at two in the morning. Now sorted, as the older one has his own bed to sleep on, and the younger one has nobody to fight with.

The Booker Prize is announced today. My vote goes clearly to Emma Donoghue for 'Room' - excellent writing. I was dismayed to see that the favourite is Tom McCarthy's 'C', which I confess I struggled to finish. Deriv

ative, clumsy, self-consciously 'clever', inconsistent, and in places just silly...I found myself sighing from time to time as I pushed myself to plough on with the thing. I do hope it doesn't win, although this year's shortlist was so thin in general that I don't trust the judges' judgement at all - not least since they didn't include such gems as the offerings by Helen Dunmore and David Mitchell, both of which I would recommend highly.

This week's major discovery has been Baldo rice - I'd never heard of it before, but the Tecchnical Department came across it recently, and ordered a year's supply online. I think it comes from somewhere in the Po Valley and fortunately, given how much of it is now on the pantry shelves, is superb. Light, with loads of starch, and a

character that means that the grains remain quite distinct even once cooked. I've now tried it twice, once in a risotto with limoncino leaves, and then again a couple of days ago in risotto with some chanterelles which we found at the amantea man's shop in San Francesco. Both times, delicious - the second time, even more so, as the risotto was made with a sofritto using fat from the partridges we were given in London a couple of weeks ago (and which the TD plucked and drew, before we put them in our luggage to 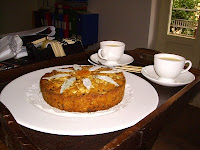 bring back to Pisa), as well as stock from a spit-roast guinea fowl, which we had on the evening we got back.

Otherwise, a good apricot and cinnamon cake, decorated with crystallised limoncino leaves (yes, a theme emerges - but prompted mostly by my need to give the limoncino bush a haircut, rather than culinary necessity), and a fairly delicious walnut baklava, which I'd never tried to make during all the years actually living in Greece. Pretty delicious, and in fact indistinguishable from that made by the baker who's oven used to back onto the house we lived in back in the seventies.

I think it must be instinctive - as the evenings draw in, the home-and-hearth impulse kicks in, and baking comes to the fore! 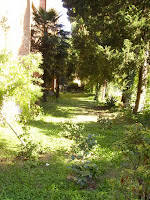 Asparagus & Gruyère bundles in Parma Ham, roast and then served with a Balsamic dressing.