Highlights of the week...

Lunch at Da Marino in Serravalle...we hadn't been in years, and managed to persuade the Belfortes to meet there rather than flogging all the way into Florence for lunch at Osteria Uno (or whatever it's called these days, I forget now...) and a De Chirico exhibition afterwards at the Strozzi. In the event, the Belfortes did the exhibition beforehand, proclaimed it a complete waste of time, and lunch was splendid! The lightest ribollito imaginable; a dish of polenta with white truffles and a poached quail's egg...sublime; excellent rabbit; a delicious stifato; a couple of bottles of excellent sauvignon...and the inevitable fragolina to drink with dessert(which was a little ho-hum...dessert, I mean...but then, that's generally the case in Italy; desserts just don't form part of the vernacular, I've come to realise).

Thousands of fireflies in the garden every evening. Literally, thousands. The first evening that I saw them from the terrace, I went along to the end of the church to see how they appeared away from any light source, and looking along the walk at the back of the church was like a miniature version of Oxford Street at Christmas. Myriad pinpricks of light piercing the darkness, flashing on an

d off as the flies drifted around in the warm night air. Completely surreal.

Poppies, blood-red, suddenly appearing in their hundreds on the north lawn, in the morning sunlight. Renoir would have been reaching for his brushes. I'm afraid I just got the lawn-mower out, instead (nothing against poppies, but it was time for the lawns to be 'done'...and in this garden, it's a constant struggle to keep the forces of nature even halfway at bay; in any event, there were hundreds more poppies in their place two days later). 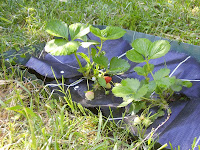 The first of our strawberry crop!

The arrival, finally and after a few false starts, of summer...

And the low-point of the week? Losing the will to live in the kitchen design department (Ha! If ever there was a misnomer!) of IKEA in Sesto Fiorentino. We're installing a kitchen in the first floor of the old house as part of the process of selling it. Te 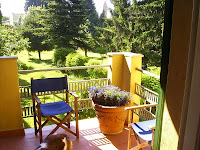 chnical Dept thought it would be quickest to order the stone from IKEA, on the basis that they must process hundreds of orders like this every week, and therefore it would all be quick and efficient and painless. As if! Two hours of standing around, while two assistants who clearly had no clue what they were doing ineffectually pressed computer keys for a design software programme which they had no idea how to operate. In the end, we lost patience, and left them to it. For all I know, they're at it even now.
We'll just go back to Signor Roggi, and order the stone from him - even with his eccentric delivery timetables, he can't be half as bad as the witless lot at IKEA...

Involtini, with Leek and Parmesan; Fagiolini.

Lemon Tart
Posted by Pomiane at 07:17