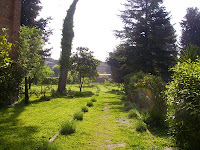 The senior four-footed takes refuge in the shade of the yew tree as I finish weeding the southern beds - hemerocallis, lupins, delphiniums, roses - and the junior four-footed repeatedly presents me with pine cones to throw for him to chase (and risks severe displeasure as he tests the boundaries of exactly what "Off!" means in relation to newly-weeded flowerbeds...) 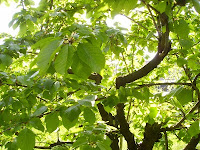 On the fruit trees, pears, plums and apricots already begin to bulk, and the cherry harvest looks set to be on in an industrial scale. The sweet orange tree is heavy with buds, and the bitter orange and lemon trees are following at a respectable rate. Lilacs and azaleas are full of blossom, the first roses are opening in the sudden heat, and the later-blooming rhododendrons will soon be a blanket of flowers. Not all joy though, as every single peach tree has succumbed to peach-leaf-curl, and although a good dose of fungicide ought to sort out the problem, it probably means not much of a crop this year.

We now have two fully-functioning wells, just in time to fill the new lily pond for the transportation 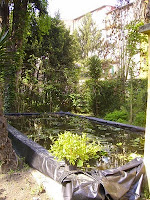 of all of the water lilies and water hawthorn from their previous home. At the moment, the new pond looks a little jerry-built, but once we've raised the sides slightly and put in place the coping stones (which ought to mean the pond-liner will no longer be visible) then it should start to look as though it's been there for decades.

I celebrated the functioning of the wells, last Wednesday, by laboriously carting buckets of water all around the garden - which of course meant that we awoke on Thursday morning to the sound of rain, which continued unbroke 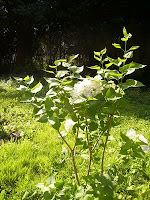 n right through until nightfall. A good reason to pile into the car and head off to Pescia - which the Technical Department has wanted to do for ages, in order to sort out the support system for the pergola we'll put between the barn and the house. Even better, though, was the discovery in the centre of Pescia of Ristorante Mason which proved yet again the inverse rule between the interior decoration and the quality of the food on the table. The dining room showed all the aesthetic sense of a seventies drag queen (with aspirations to milanese chic...swirls of coloured satin draped around the place, and a colour scheme that would probably be called by the cognoscenti a mixture of 'mustard' and 'tranny red'), and the food was absolutely excellent! Desserts were slightly sub-optimal...but then that served us right for being so greedy as to order them...

Of course, within five minutes of getting home, the TD had decided we could do a better job with the pergola by stringing support wires between the buildings, and so no need to have gone to Pescia in the first place.

Panettone and Raspberry Bread & Butter pudding.
Posted by Pomiane at 12:44