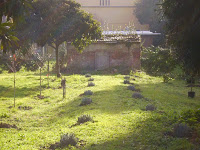 ...is doing its best. The crocuses arrived en masse several days ago, and all over the garden narcissus are raising their heads - often in rather unexpected places, as I only hazily recall where I planted all the bulbs in the autumn; I kept having to make abrupt halts when cuttin 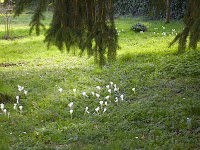 g the grass the other day and repeatedly realised I was about to massacre yet another clump of flowerheads.

The mass planting is done - all except for three more large rhododendrons, needed to hide from view the deeply unbeautiful corrugated-iron sides of the compost heap. All fruit and nut trees in their serried ranks (and the new almond trees already dutifully in blossom); the soft fruit, bedded down (all I have to do now is cordon off th 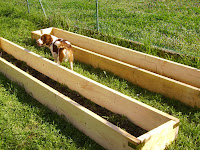 at area of the garden, as the four-footeds seem drawn to it like a magnet, and tender strawberry plants fare badly under canine attention); and even the raised asparagus beds have been finally sorted out, and now nestle at the side of the old orchard like a couple of hastily assembled coffins. On close 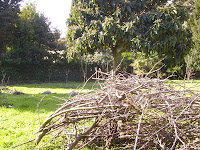 r inspection, I discovered I had twice as many asparagus crowns as I'd expected, which ought to increase the chances of a decent crop...

Signor Tempestini, with Omar, his moroccan sidekick, came and pruned all of the old fruit trees last week, since when I've been dealing with the mountains of debris they left in their wake - apples, apricots, plums, pear and peach trees, all of which had been neglected for the past four or five years, and were in a rather bad way as a result. The plum trees were on the verge of bursting into blossom, and dotted around the house now are vases stuffed with the things, like ikebane on speed, as the Technical Department describes it. Most of the branches have been destined for the garden shredder, though, as there's just too much of the stuff to deal with to be concerned with the aesthetic aspect of it all. 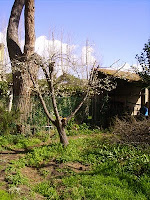 Squid, stewed with Peas and Tomatoes.

Chocolate Tarts.
Posted by Pomiane at 07:47