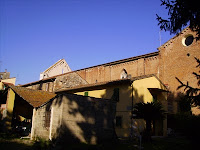 At last! And although there are some 'minus' figures in the Tempo Italia forecast for the next week, they have a tendency to disappear as the days in question approach. This morning, the garden was flooded with sunlight, and the various church spires visible through the leafless branches of the plane trees on The Martyrs' Square looked like the backdrop to a springlike Van der Heyde 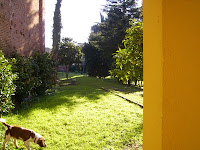 n or de Hooch. Bizarre, really, given where we are.

The planting programme began this week, with about a third of the new fruit and nut trees having gone in (peaches, pears, cherry, hazelnuts, walnuts...) plus two small camelia japonica plantations, and a very robust new Magnolia Stellata. I'm not sure what's supposed to be in the next shipment, but I know that in addition to the remaining fruit and 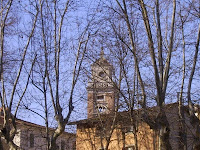 nut trees, we have cyprusses, poplars and arbutus trees coming at some point, along with some more plantations of Rhododendron, Hydrangea, and japanese azaleas, as well as enough lavender plants to line the causeway which runs through the centre of the garden. All very satisfying. Indoors, the brazilians proceed apace 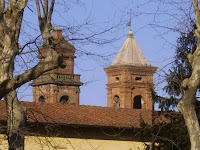 , and have made great progress with the ceiling beams in the salone. We're off to London this afternoon for a couple of days, but haven't told them that we're going - it's the sort of information that immediately means they focus their attention elsewhere, and their rate of work inevitably dwindles to nothingness. As it is, by the time they notice that we aren't popping up to bug them any more, w 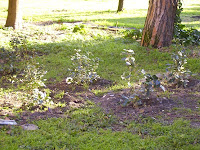 e'll have reappeared and everything can continue as normal.

The new kitchen seems to be turning into a reality - carcasses are all in place; the slate work-surfaces are being shipped from Wales in the next couple of weeks; ovens, fridge and warming drawer are all ordered and somewhere in the pipeline; floor tiles are due to be delivered next week. All the doors we found in the freezing cold recupero in Imola two weeks ago have now been delivered and are waiting to be installed (we suspect they've all been ripped out of old farm houses in Romania, and shipped down by the truckload - nothing as rustic and agricultural has been seen in Tuscany since at least the seventies, I should think!). Current planning is for us to be able to move into the house in about a month from now.

Risotto of Funghi Porcini (yes, I know it's against the current regime, but we'll be just off the plane in London, and Sarah's turning up for supper, and there are limits to what is practicable - and given that we already fell off the regime yesterday evening when the Cini-Gamberonis came to dinner & I served Prune & Armagnac tart for dessert, then a small risotto isn't quite such a heinous crime )

Apple Strudel (Sarah's bringing it)
Posted by Pomiane at 12:30

it such a very nice post! it is worth reading,