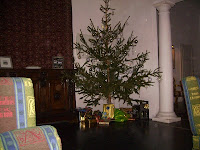 One present a day from under the tree keeps Christmas more or less under control...as well as stretching the whole thing out in a fairly agreeable way. For some reason, while the puppy is fascinated by the whole process, the senior four-footed appears to be deeply antipathetic towards Christmas presents this year - he dutifully comes along to be there for the daily exchange of gifts, but manages to communicate very effectively that he really wishes that we wouldn't do it...looking resolutely the other way, and heaving deep sighs of disapproval throughout.

We've eaten too much - although I'm not quite sure why, since we haven't been entertaining - and already there are murmurs about going on a diet and going on the wagon, once we get beyond Twelfth Night. There's probably much to be said for both! Respectable inroads have been made into the Wolfert oeuvre: rabbit stuffed with salami & fennel; quail, with sag 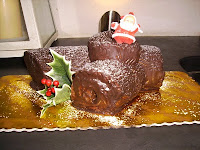 e & white grapes; chicken, with orange & cardamom; ricotta ice-cream, with fresh pears; apple croustade. Then there have been a few experiments of my own , such as duck & orange ravioli ...and an emergency batch of lattice-topped mince pies in exchange for a yule log that Massimo dropped round (where the implication was t 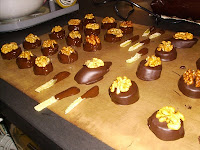 hat it had been fata in casa, but we rather concluded otherwise, having tasted it). And we spent Sunday afternoon producing a batch of banana and walnut chocolates as a dinner party offering for that evening, where we'd been invited over the river to Via Mazzini.

No gardening, since the past week has been nothing but rain. Every so often we take the four-footeds to Santa Caterina, for them to run around and get soaked, while we check indoors on the Brazilians' progress. Which is slow. And regular effort is needed to prevent them from wandering off mid-task in order to go and start a completely different job in another part of the house, and thus spread builder-chaos over as broad an area as possible.So far (cautiously) so good...

Against the background of the rain, I've read Colm Toibin's 'Brooklyn' ( and savoured every last page)...as well as traipsed the length of Italy in James Holland's 'Italy's Sorrow', which covers the Italian campaign of 1944 in all its awfulness.