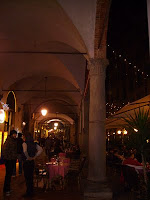 Or, at least, it has in Pisa. Tuesday was the Feast of the Immaculate Conception, and this is the point at which the descent into Christmas truly begins. The rush is on, every year, for Christmas trees in the days immediately beforehand - no question of waiting lackadaisically until the 22nd to put the tree up...it has to be up in time for the 8th - and the town is in full festive dress in time for the passagiato which takes place through the main streets on the evening of December 7th. Lights raining gently down from on high for the length of Borgo Stretto and Via San Francesco, and the balustrades of the Ponte de Mezzo heavily swagged with pine garlands, all the way to the enormous (and decidedly lopsided) Christmas Tree which appears every year in the little piazza beside the Loggia dei Banchi. I hadn't particularly planned to join in on Monday evening, but since we needed 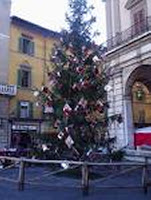 some light bulbs from the shop in Via Santa Maria and it seemed a good idea to give the dogs an airing, we emerged from the house to find the streets thronged with people, and the outdoor cafés absolutely packed! The atmosphere was festive, and the four-footeds thought it was great...

I love the italian attitude to the religious holidays with which their calendar is peppered. Throughout the year, with no warning whatsoever, the whole country grinds to a halt in celebration of some obscure religious event at some point in the past, and the population opportunistically heads for the beach or stays in bed (depending on the time of year), whilst the same dwindling throng of increasingly elderly ladies actually kneels in church in order to mark the day of religious observance. In practice, Italy is no more nor less devout than the UK (which means in practice, pretty negligibly), but somehow the Italians have retained the structures of an organised belief system, whilst in fact they milk the opportunities of the holiday schedule for all they're worth! And unlike the UK, where public holidays are generally tidied away to a Mond 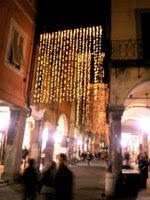 ay or a Friday, the saints' days stick 'religiously' to specific dates, and if that happens to be Tuesday, or Thursday, then so be it...that is indeed the day that God has decreed for sunbathing!

In London, on the other hand (where we currently are for a few days, while the four-footeds hunker down in Calci, and doubtless watch endless Italian daytime TV in the company of Arianna, and a box of mini Bonio...) you'd be hard pressed to know that Christmas is imminent. Certainly, it would be easy to blink and miss such sparse decorations as there are around the place. I guess this is a result of Broon's deeply iffy handling of the economy, and it all seems a fair - if unfortunate - reflection of the dour and cheerless personality of the man himself.

Canapés of Chicken Liver rolled, with Sage & Juniper, inside Bacon and grilled until crisp.

Chocolate Tart with Orange-flavoured Crème Anglaise.
Posted by Pomiane at 13:30