...that although it wasn't the worst dinner we'd ever had, it ranked up there amongst the more memorably bad in our group's combined lifetime's dining-out experience of around several hundred years! Last Friday night, a dinner in Poggibonsi, organised by the local chapter (or should it be 'coven'?) of the Slow Food organisation, of which one of the Belforte

contingent is a member. We' d been warned in advance to go easy on carbohydrates in preparation, as the theme of this particular banquet was flour, and the menu appeared to consist of seven different pasta courses followed by a chestnut cake...A challenge, maybe, but not necessarily one we couldn't meet...after all, seven pasta courses could have comprised deliciously light capelletti, and ravioli, and papardelle, with unctuous fillings and delicate sauces...lasagne, and strozzaprete, and fettucine....
They could have done. But they didn't. With knobs on.
The pe

ople behind the menu seemed 100% signed up to the misguided Slow Food belief that 'real' food has to revert to peasant cooking at its most back-to-nature level, and each course was earnestly introduced with a description of the particular kind of flour which had gone into it. Farro featured quite a lot ('spelt' flour, in English) as did Grano Saraceno (both as farina and as semola), along with various other varieties - but all of the end results on the plate seemed to me like buckwheat pasta, of a uniform grunge colour, whatever particular strain of flour had gone into the dish! On display in the room were trays of the stuff before it was cooked, all of which resembled large and rather hairy grey cornflakes, and even before the food started to appear, slight doubts had already begun to form.
In the early stages, it was ok....an under-seasoned cream of spinach in which lumps of cooked pasta floated was disappointingly bland, but was quickly redeemed by another cream of som

e kind, which contained boconcini stuffed with ricotta and basil. Thereafter, though, we were assailed by course after course of indigestible brown pasta, all carefully explained to us, and generally accompanied by the statement that this particular kind of flour is 'multo difficile a lavorare' . "So, why bloody bother?" was the muttered riposte, after yet another steaming bowl of the stuff had been set in front of us.
I think we all fell at the same hurdle - a dish of mud-coloured tortelloni stuffed with, of all things, potato, the taste and texture of which was worryingly like some kind of floor covering. Thereafter, a note of slight hysteria crept into the proceedings, and when the issue was raised as to what exactly all of this was doing to our digestive systems it was difficult to avoid a mass return to nursery humour. We managed. Just. I'm not sure, though, that our final flight into the cold and rainy street outside - once we'd waded through our dessert of chestnut cake with fig marmalade - wasn't followed by the disapproving glances of some of the more worthy of the Slow Food groupies we left behind us.
All-told, it had been the gastronomic equivalent of an early-English music festival...resplendent with crump-horns and dingle-flugels and whatever, all of which is probably historically fascinating, but about which our senses tell us that whatever has happened since then very definitely falls under the heading of 'progress'!

Oh, there was one positive note to the evening. Taking refuge from the terrible weather outside, we'd arrived half an hour before we should have done, and were served while we waited with glasses of a spumante called Meissa. From the hills above Piacenza, it was wonderful. Delicate, without being thin, and with a hint of apricot. A splendid discovery. 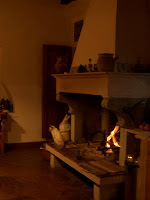 And the following night, before the blazing kitchen fire in Belforte, we feasted on roast lamb, directly from one of the local farmers, accompanied by green beans and a zucchini gratin - all from the garden - as was practically everything that went into the dessert of apple & rosemary crepes with a lemon and walnut sauce. Now, that was real food as it should be!