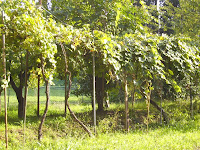 We have an abundance of them at Santa Caterina, and the strawberry-heavy scent in that area of the garden is quite splendid right at the moment. The vines are heavy with plump black fruit - literally thousands of the things - and to 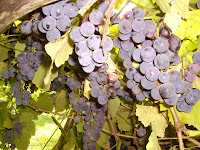 walk beneath the grape arbour is an intoxicating experience. 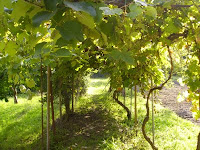 erstood that the wine made from fragola grapes is illegal - although like all things in Italy, it isn't quite as straightforward as that. There's a rather disgusting sweet and fizzy red wine, sold in great quantities in most supermarkets, which calls itself fragolino, but which I suspect is made with some sort of flavouring agent rather than from the fragole grapes themselves. Otherwise, it appears that there's no law against making wine from the grapes, but there is a law against selling it commercially, once made... so, at least self-harm is acceptable!


We first came upon a white dessert fragolino at a restaurant in Seravalle (which shall remain nameless, in order to protect the guilty) one rainy lunchtime about eight years ago. We were with the 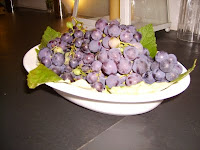 Brancolis and the Belfortes, and it was one of those occasions when it was raining chairlegs outside and there seemed little point in finishing lunch... and so we just extended it lazily for the entire afternoon, with the owner every so often suggesting something else we might like to try. Finally, a label-less bottle of fragolino was uncorked, and we all had several glasses of the exquisite (if slightly syrupy) contents. The end result was that we all bought a case of the stuff, and it remained a staple house delicacy for quite a long time thereafter. In fact, it even had a renewed lease of life after the Brancolis were told that fragolino causes blindness or infertility or something, and so we said we'd happily take their remaining stock off their hands (since it does neither thing, but the evil rumour seems to have been put about some years ago by some disgruntled Austrian wine-producers, and the Brancolis weren't keen to risk either eventuality). 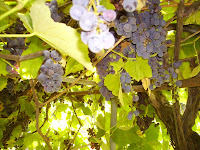 I doubt we're going to start wine making any time soon, and there are only so many dozens of bunches of grapes that one can plough through in the course of the season, so I've been researching other options. There is a method of using them to make a fruit jelly, which is ok, but frankly, jelly never exactly resonates with me - really, it's food for invalids or for people with no teeth...in both of which cases, sufficient unto the day. Valentina Harris has a recipe for a grape-studded schiacciata (a first cousin to a ciabatta, in many ways) which is very moreish and would be excellent with fragola grapes, and I've just come across a recipe that uses them in a rather dense cake. Definitely worth trying.

Peach and Marsala Cream Tart.
Posted by Pomiane at 09:06