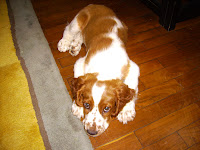 The mini four-footed has moved in. Last Thursday. He is, of course, beautiful...and highly intelligent, and desperately precocious...and all those things that proud parents modestly acknowledge in their newly-arrived progeny, whilst quietly harbouring ambitions of a Double First and a rowing Blue. On a more realistic level, it is true to say that he arrived already knowing his own name, and understanding the word 'No' - both being highly practical accomplishments - as well as showing signs of being almost house-trained. (Not bad for under twelve weeks....and, come to think of it, probably already better than most rowing Blues could manage!) 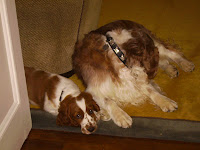 ent at the new arrival, but became more ambivalent when he saw the puppy being given food and toys - on both of which he feels he has a 100% monopoly. He'll be fine, though. At the moment, he's looking long-suffering, as he's the main source of canine entertainment round here, and is enduring a near constant onslaught of rugby tackles, and having his rump bitten or his ears attacked...all of which he ta 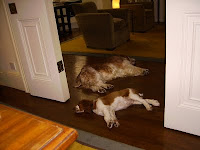 kes in relatively good part, if you can ignore the hunted expression that descends from time to time. Fortunately, for everybody, the energy level isn't constant, and it's a demonstrable fact that puppies are blissfully asleep for a lot of the time. 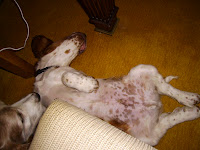 We have two weeks in London, and then we all, four-footeds included, set out on the Great Trek southwards, and will de-camp to Italy for the autumn.
Tonight's dinner:
Asparagus with Hollandaise.
Roast Beef (one of the benefits of being in the UK) and runner beans (from the many kilos of which we were given by the mini four-footed's breeder when we went to collect him)
. Passion fruit Tarts
Posted by Pomiane at 14:19

Pomiane I'm so pleased for you - puppies are such joy - make the most of these early weeks they go so quickly! He looks gorgeous. Ours is now very grownup - nearly 8months and behaved beautifully this evening in a restaurant we visited (the joys of France and being able to take a dog out to eat!)

Indeed. An abiding memory is having both dogs with us in the dining car of the overnight train from Nice to Calais - both dogs curled up quietly under the table - and a whole stream of elderly French complimenting us on how much better behaved the beasts were than 'les enfants d'aujord hui' (presumably their own grandchildren!)

Wonderful news, I'm so happy that he is finally home.