...might not approve, but we're leaving London for Italy again tomorrow, and frankly it's not a moment too soon for me! The weather has been abysmal over the past few weeks...more like October than August...but it hasn't prevented London from descending into mid-summer doldrums that might be appropriate if we were all flaked out with heat-exhaustion, but which in fact merely renders the place....dare I say it....dull!

In true silly-season fashion, there's nothing on at the cinema appropriate for anybody with a mental age over seven, and much the same could be said for current exhibitions: the choice at the RA is either The Summer Exhibition or a second ranking pre-Raphaelite (no, thanks), and the five and a half minutes we devoted to Jeff Koons' show at The Serpentine was probably two and a half minutes more than it actually merited.

At least in Pisa - where temperatures are scorching right now, and the town will be gloriously empty and silent as the grave, with the locals all having taken to the coast or the hills - days can be spent basking and reading and dozing, with appropriate 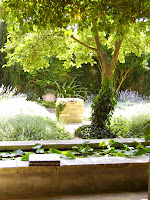 regular re-fuelling with Kir and chilled prosecco, and sun-filled early mornings and lazy afternoon siestas, and candlelight on the terrace during the long, hot, cicada-filled nights.


We appear to have a contract for the property at Santa Caterina (I'm being cautious, as although proxy signings have taken place, and there seems no reason to think that the whole thing isn't a done deal, we still haven't actually had the formal sitting-round-the-table signing session...and until that Fat Lady sings....she hasn't!). But, in any event, we can go and collect the keys when we arrive on Wednesday, and so can spend the next couple of weeks walking the course and indulging in some serious garden planning. And probably we'll have

a few days up at Brancoli, as well, to do our own bit of taking to the hills and enjoying mountain breezes, if there are any.

And then, two days after we come back, the mini-four-footed will be joining us...after which, I'm not sure life will ever be dull again!

Chicken Salad (using leftover chicken from a fricasée with porcini).

Strawberries and Jersey Cream (ok....there are some things in London that I'll miss!)
Posted by Pomiane at 08:54