Meanwhile, back in London... 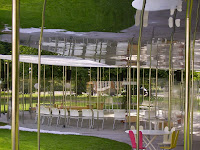 It's winter. Or, at least, it feels like it, in comparison with Tuscany! Grey and cold and raining...or if not actually raining, then it either just has or it soon will be!
Whilst walking the four-footed in Kensington Gardens, we were driven briefly to take shelter in the Serpentine Gallery's Summer Tea Pavilion. This year, it's by Kazuyo Sejima and Ryue Nishizawa and is rather beautiful - delicate and elegant, with uprights th 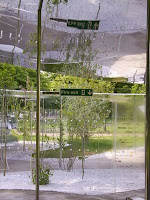 at resemble a woodland glade, and mirrored ceilings which reflect the real thing beyond the glass walls. Airy and ethereal, the only false note is the deeply plonky 'fire exit' signs idiotically fixed over the openings in the glass, which have the cretinous hand of 'Health & Safety' written all over them; the fact that in some places the signs can be seen through other glass walls which in fact block access to them would be quite worrying, were it not for the fact that the only flammable material in the whole place is probably the signs themselves. Oh, and the other false note is the staff behind the counter, from whom we tried to buy a couple of cups of coffee, but by whom we were brusquely informed that they weren't yet open...as they poured themselves cappuccino and carried on with their conversation. The catering company appears to be an outfit called 'Mint'. 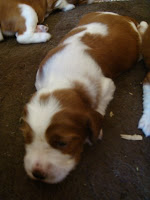 The four-footed has now just about got used to his single-dog existence...in good time for the arrival of the new mini-four-footed, who is due to be collected and brought home four weeks from now. A process that will have to be handled diplomatically, in order to ensure that the newly-promoted senior-four-footed's snout isn't seriously out of joint! Last time we went through this, nearly ten years ago, the two beasts were introduced in the neutral territory of the park, after which it seemed quite normal for them to go home together...and I imagine we'll try and engineer the same sort of thing again.

And in direct comparison with the porcini haul from the garfagnana last week, the Techni 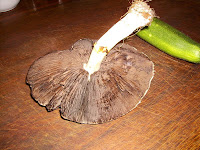 cal Department this morning found one enormous mushroom growing in his preferred wild mushroom patch, underneath an Indian Bean Tree not far from The Queen's Temple. Muttering darkly that the 'mushroom rustlers' must have denuded the patch of the rest of the crop earlier in the day, he couldn't really complain, since his solitary specimen measured almost eight inches across the centre of the cap!

Tonight's dinner:
...is in Dolphin Square. It's nearly Sarah's birthday, so we're taking her a raspberry-infused Marjolaine to make her feel better about the fact that's a 'zero' birthday (always a thought-provoking event).
Posted by Pomiane at 10:16