Last week, my computer died. Definitively. With a deafening and high-pitched scream, which indicated that recent ministrations by the Technical Dept had achieved nothing...and that if the beast wasn't swiftly despatched, in order to put us all out of our misery, its banshee wail would drive the entire quartiere to distraction. It now rests in the elephants' graveyard which is laughingly (ha!) supposed to be the computer repair shop at the other end of Via San Francesco...but the only basis on which I would leave it there was because this was (only marginally) better than merely slinging the thing in the dustbin forthwith. Last year, the TD left one of his subsidiary machines there to have the hard disk upgraded, and we've not seen it back since!

Hence the protracted silence over the airwaves for the past week or so. Now broken only by the expedient of investing in a new computer...by which I'm deeply impressed, as I had no idea that laptop technology had advanced in the past seven years (since I last upgraded) to the extent that it has. No more steam-driven internet access for me!

And in the meantime, you've been excused postings about the weather, which was truly unbearabl

e for several days, as humidity levels reached an all-time high. To the extent that all the salt and sugar which weren't in sealed containers solidified into claggy lumps, which made them very difficult to use. And in the middle of that period, I made the mistake of thinking I'd make ravioli for supper, one evening. Even as I was clamping the pasta rolling machine in place, I started to have well-placed misgivings. As the sheets of pasta got longer and thinner and clammier by the minute, I realised that fresh pasta, in its own way, is as sensitive to climate as is chocolate. And just as you don't temper chocolate on a hot day, so you don't even think about rolling pasta when there's a hint of humidity in the atmosphere. 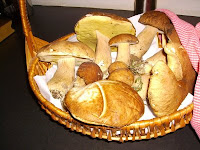 And as we were gasping at the temperatures down on the plain, and wishing that the distant rolls of thunder would resolve themselves into a decent air-clearing thunderstorm, up in the Garfagnana it was apparently bucketing down. With the result that Umberto was s 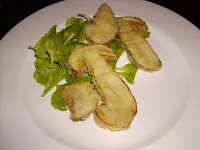 oon delivering industrial quantities of funghi porcini to Louisa, next door, and she in turn was passing on generous quantities of the same to us. The consequent funghi porcini fest lasted three days, with porcini roast in the oven with garlic on the first day, followed by a porcini and parmesan salad on the next day, and finally indulging in wonderful porcini tempura on the final funghi dinner. The stuff of memories...!
Tonight's dinner:
Phyllo tart shells, filled with chicken livers and wild mushrooms, in a cream & marsala sauce.
Salsicce, with sweet & sour zucchini.
Chocolate-vodka clafoutis, with fresh apricots.
Posted by Pomiane at 16:36

Pleased to know that you've been upgraded, wizard little things these lap-tops.

I hope the humidity has abated, I can't function in it at all.

Humidity receded, to be replaced with merely baking heat...which I don't mind; it's the time of year when all chores have to be completed by mid-morning, as it's just too hot after that to get anything done, and afternoons are given over to dozing gently in a darkened room, under the soothing breeze of an electric fan...

What an image, dozing in a darkened room, sounds idyllic.