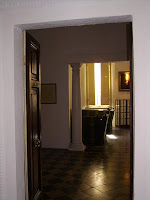 ...from selling-the-house activity. Which is going quite well ( I think - although, until the ink has dried on the cheque, I'm not sure how you can tell.) Smiling encouragingly at coachloads of potential purchasers has become a little 'tired', I admit, and they've been coming through the door at an average rate of three a day (potential purchasers, I mean, not coachloads) ...so a fortnight back in London to recharge batteries is quite welcome. 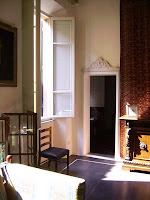 The garden has been doing its utmost to support the sales strategy, with cascades of blooming roses all over the south pergola, along with geraniums, and water lilies, the occasional iris, masses of jasmine blossom, and a whole host of dianthus (which will now continue flowering right through until Christmas, I should think). I'm not sure how much of an effect it all has on the Italian P.P.s, though, as - contrary to what you'd expect - gardening really isn't an Itali 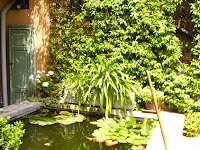 an thing, and so it may be that when they stand on the terrace and appear to be admiring the view, in fact they're merely thinking what a hell of a lot of work it all looks!

When we move out, we'll initially be renting somewhere to live, as the one we want to buy is being sold at auction only in September (

hence wanting to sell first, in order to be in a position to participate), and anyway won't be habitable for many months to come. First rental option looks very possible - the piano nobile of a palazzo on the lungarno, with views across the river, a carriage-rutted entrance hall and a grand staircase which are both straight out of 'Room with a View', and a ramrod-backed white-haired Contessa for a landlady who lives on the floor above. The fact that the bathroom (singular) also appears to come from 'Room with a View' and the absence entirely of a kitchen are matters to be addressed as part of the negotiation process. Not insuperable obstacles, though.

Otherwise, we've expanded our property empire by leasing some storage space in the same street as the P

alazzo we're lusting to buy - tempting fate at this stage, I know - which has until now been the enoteca (wine store) for the Colonnino restaurant. It's somewhere to put all of the garden equipment and loggia furniture, and all of those things which won't very comfortably or appropriately squeeze into the parquet-floored rooms of the lungarno piano nobile. The ex-enoteca belongs to an octagenarian monsignore, who started off by quoting to Massimo - who's fronting all of our property transactions - a monthly rent which seems about thirty years out of date (hurrah!), and then followed it with a suggested rent review schedule which was just eye-wateringly steep. Massimo put him right on the latter (whilst rolling his eyes and making a few pithy statements behind his hand about

" priests " and their attitude to money) and we ended up with a very acceptable compromise.

And this week's culinary discovery: the addition of a spoonful of finely chopped fresh rosemary and some vanilla to the base for a tarte aux pommes. Where normal procedure would be to cook the diced apple until it collapses, add butter, sugar (or Splenda) and some dark alcohol and then add lemon, cinammon and some apricot jam, the new version omits the last three ingredients, and instead requires a small quantity of good quality vanilla essence, and about half a tablespoon of finely chopped rosemary. Excellent flavour, and in fact tantalisingly difficult to identify.
I tried it for the first time on Saturday, when we had the Miccoli-Freers to dinner in Pisa, and then again yesterday evening, after a hypothermia-inducing couple of hours at the Gala evening at Chelsea Flower Show.