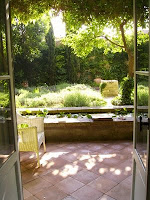 We're selling the house. Or that's the idea, at any rate...Had you asked me several months ago, I'd have laughed at the suggestion, but to cut a long story short, a building we've lusted after for years from afar (in fact, a mere two streets away...but it's always seemed an impossibility) has unexpectedly come onto the market. We can't have both...and the prospect of sixteenth century frescoes and a garden four times the size of our present one make the whole thing a bit of a no-brainer. 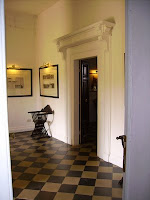 As a result, we're suffering an onslaught of prospective purchasers and agents - eight in the past three days alone! - and there has been much strategic 'home and hearth' cooking, in order to encourage the process. Since the smell of freshly-brewed coffee will apparently clinch a deal faster than the speed of light, there seemed good reason to pull out the stops and get the gastric juices flowing as a backdrop to pointing out the glories of underfloor heating and the generous storage space under the stairs. Tuesday morning's visits were conducted against a backdrop of baking Apple 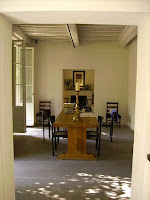 cake (with generous quantities of cinnamon - the smell as it wafts through the house is fantastic!), and the afternoon show-rounds were accompanied by Ragu, richly aromatic as it bubbled gently away on the stove. The smell of baking pastry works pretty well, too, and lemon and tomato tarts have both appeared on the dinner menus this week as fringe benefits to the house-selling initiative...

And the other all-change is puppy-related. With all fingers crossed, 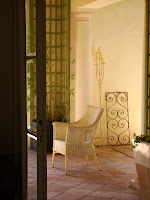 it seems that a great-niece of Bosun's is due to produce puppies next month; one has been reserved, and the Junior-Four-Footed (who has been terribly stressed at being on his own for the past couple of months, poor thing) is now Senior-Four-Footed-in-waiting. The mother-to-be is very beautiful, and in fact looks quite like Bosun, who is greatly missed by all. 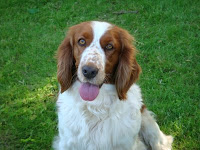 Crespelle, filled with Pears sautéed in Butter & Cinnamon.
Posted by Pomiane at 07:23

Good luck on both counts! I wondered how long it would take you to get a puppy...

Oh, there was never any question that a mini-four-footed would be appearing on the scene...but the challenge was finding one from the Goldsprings line (which all of our dogs have been)that would fit the likely timetable of moving house. Fingers crossed that this one will work!

I am stilleagerly awaiting the picture of the new four-footed arrival... or have I missed it?
Did your braised lettuce recipe in a hurry last week when no veg could be found on short notice: a success. Thanks to TD - clearly the new computer is being put through its paces. The site looks great and I love the new gadget on the right where one can see who else around the world is also enjoying Pomiane.

You must have blinked and missed it. In fact, I've posted several, but the most recent was a couple of days ago, when he was looking decidedly ruminative...he'll be leaving his mum and setting out on his great adventure on August 27th, so a positive deluge of pictures can be expected after that date.

Yes,indeed I had blinked at the wrong moment! Now, I can't wait to read the story of how the first meeting went. Il etait une fois....