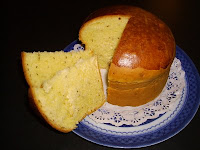 Not sure how I'd missed it before, but it appears that there's a traditional Italian Easter Cake - 'Schacciata di Pasqua' by name. It resembles a large button mushroom, and is flavoured with aniseed. Beyond that, sadly, there's nothing much to be said for it. Being naturally cynical, I strongly suspect that this Schacciata isn't so much a time-honoured tradition, as a construct on the part of the Panettone manufacturers, who were casting around for ways of making money once the Christmas-Panettone rush was over. Yet another example of the 'fakelore' impulse which has seen the appearance all over Italy of so-called ancient customs, most of which involve the locals inappropriately wearing moth-eaten 'medieval' costumes and performing some specious activity in order to part gullible tourists from their money.

The Schacciata itself is fluffy and insubstantial, and the slice I ploughed through was a little like eating flavoured polystyrene. As with Panettone, I think probably the best use for the thing is as the base for a Bread & Butter Pudding. 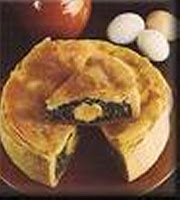 Otherwise, I've come across something else, which probably has a greater claim as traditional Easter fare: Pasqualina. This is a double-crust pie, filled with a ricotta and swiss chard mixture in which whole raw eggs are placed before the top crust is fitted, and they set as the pie is baked. The only 'old' recipes I've found for Pasqualina use what seems an unnecessarily complicated (and heavy!) format of oiled layers of a rather dough-like pastry; I'm replacing that with a much lighter puff pastry, which should be considerably more digestible. 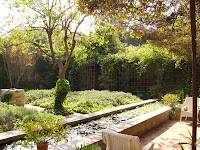