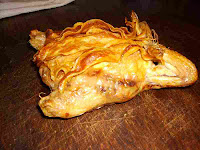 I'm not normally a fan of poussin - the flavour is bland, and if you merely cook it whole, then you're hard-pressed to stretch one bird to feed two people, even after you've worried every last available bit of flesh off the bones. I thought to try this method, though, after a Christmas experiment the other week, when supplies were low, and I had to make one wood-pigeon do for two people. It still had its giblets, and so - having boned the bird - these were used as stuffing, in order to bulk up the end result. It worked well, and the poussin version given below was a very successful further refinement of the idea. By removing the ribcage and leg bones, one poussin was not only sufficient to feed two people, but there was even enough left over to use in a salad as a starter the next day.

1. Reconstitute the dried Porcini in boiling water for twenty minutes or so, then drain a 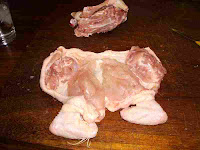 2. Bone the Poussin; remove the ribcage and all leg bones, but leave the wings in place.

3. Finely dice the Onion, sweat it in melted Butter until translucent, and then combine with chopped Liver, Breadcrumbs, Brandy, Marjoram, chopped Porcini, beaten Egg, and Seasoning. op the bones. Film the bottom of a sauté pan with Oil and soften the thinly-sliced Celery for several minutes, before adding the chopped bones to brown. Once the bones have browned, add the Wine and boil down, then add Stock and Soy Sauce and simmer for half an hour or so, until reduced to a small amount of deliciously concentrated sauce.

5. Stuff the boned Poussin with the Liver-Porcini-Onion mixture, then roughly re-form the bird, lay it in a greased roasting pan, an 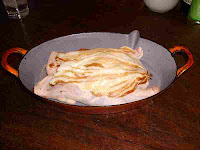 d lay slices of Pancetta over the top.

6. Roast 35 minutes in a 200 degree C oven, and leave to rest for five minutes before slicing to serve.

7. Either drain the reduced sauce to serve it or, as I generally do, use a spoon to retrieve sauce from amongst the debris in the pan. One spoonful of sauce should be sufficient for each serving.
Posted by Pomiane at 10:38