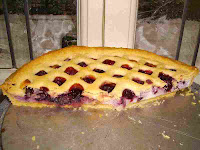 I waxed lyrical about it several weeks ago, when I was rediscovering the joys of hand-rolled pasta...but since then it has also turned out to produce surprisingly effective short-crust pastry, as well. 'Surprisingly', because the point about "00" is that it has a higher gluten content than normal, and so you'd expect pastry made with "00" to turn out tougher and to be generally less of A Good Thing than otherwise. Not a bit of it....Recently, when making a lattice-topped blueberry pie (for which my more usual choice of phyllo was inappropriate) I got caught short on bog-standard plain flour, and had to dip into the "00" which until then was reserved for making pasta. The result was a short-crust par excellence - light as air, but with none of that irritating tendency to fall apart that short-crust has when at the very 'shorter' end of the scale. Not entirely trusting the result, I tried it again a week later, with exactly the same result.

"00" is more expensive than the standard alternatives....but not astronomically so; in Italy, we're talking 97 centesimi a kilo, as opposed to 62 or so....and I think the equivalent quantity is available in Waitrose for around £1.40. It's definitely worth the extra - just as carnaroli is worth paying more for than arborio when making risotto - the difference in result hugely out-weighs the extra pennies at the till. 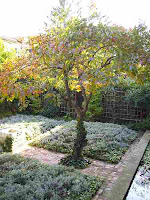 This week, autumn has hit Tuscany with a vengeance. Apart from one day, when the clouds parted and thin sunshine made a half-hearted effort to dry the garden, it's been endless sturm und drang ever since we arrived a week ago....Thunderstorms night after night, and sheets of rain coming down with monsoon-like ferocity. I assume it is just local to Pisa, though, as the Arno seems no higher than usual - generally, when there are several days of rain on the trot between here and Florence, the river level in Pisa rises quite dramatically, and people begin to think of the famous floods in '66, when most of the bridges were swept away, and our entire quartiere was a metre or more under water... 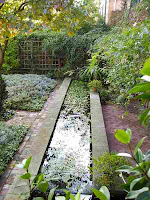 As it is, we wake every morning to the sound of water pouring relentlessly from the gutters, and a daily task is to sweep away a fresh inflow of leaves that have yet again carpeted the floor of the loggia overnight.

In the rare interludes between rain, the garden is taking on its autumn hues, when the pomegranate tree gradually turns a vibrant, acidic yellow, and the Caci becomes a rich burnt orange. I no longer have to fight to restore order to the chaos of creeper and climbing roses which densely coat the pergolas - I now have a three or four month break from that particular task - and instead am gradually putting the garden in its winter format. The Cymbidiums - budding nicely - and Cyclamen, and Gladiolus Tristis have all come out from their summer hiding places, and I managed to plant 100 white crocus bulbs on Sunday afternoon, before the heavens opened yet again... 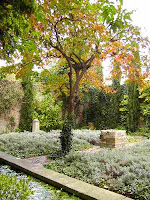 Menus are changing along with the season, as the declining temperature and blazing fires turn the mind to the trencherman's hearty fare of roasts and pies and the sort of sticks-to-tiny-ribs food that keeps the cold well and truly out. Last night was cauliflower in anchovy sauce, followed by guinea-fowl pot-roast with celery and Marsala... Winter certainly isn't all bad!

100 white crocus bulbs will be beautiful. I might do the same in six months for next (southern hemisphere) spring.

Since I've now posted the recipe, you can try the pie for yourself!

The white crocuses are the tall (and quite blowsy)variety - Jeanne d'Arc is the name. I planted a whole lot last year, which grew through, and looked splendid against, the glossy dark green of the leaves of the Winca Minor .....so decided that a whole lot more elsewhere in the garden could only be a good idea for this year as well...