...is a very welcome concept after a couple of weeks of practically non-stop travelling. Airports and planes, and poor (if not non-existent) internet connections...and hotel breakfasts

(I don't normally have breakfast, but somehow business trips exist on an alternative plane, and all usual reference points count for nothing...) and early morning alarm calls....and endless, endless, endless hours of CNN reports on the global financial meltdown! I watched Lehmann Bros go bust in Mumbai, George W's bailout plan be given the bum's rush in Athens, and Fortis go belly-up in Munich! I'm hugely relieved to be back now in a blissfully TV-free environment, and able to ignore the whole damned thing....

say that in all of that peripatation, there was little of note to report on the culinary front. There was one memorable Coffee Parfait in The Grande Bretagne in Athens, served with the merest drizzle of an exquisite Hazelnut Sauce ....which was (apparently) simple, and unarguably sublime....and a soup in The Lenbach restaurant in Munich which was worthy of serious analysis - Lobster and Saffron bisque, I think, in which floated delicious chunks of

red mullet and artichoke heart. Beyond that, though, airline food never rises above the pitifully poor, and the culinary offerings of neither Greece nor Germany are ever likely to set the gastronomic pulses racing.... 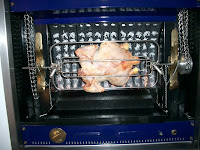 omplete delight to get back to my own kitchen, roll up my sleeves and get life back on a sensible footing . As ever, October in Tuscany is quite wonderful....the days still and clear, which start with bright morning sunshine, and a light mist rising over the garden; by midday, the heat is quite intense, and as the evening draws in, the chill in the air suddenly prompts sweaters and closed windows and the uncorking of bottles of hearty super-tuscans. This is the season when the wall-mounted barbecue in the kitchen comes into its own, and all of the atavistic home-and-hearth impulses rise to the surface. Yesterday, for the first time since April, I dusted off the barbecue - which can't be used in summer months as it throws out far too much heat for comfort - and watched with atavistic pleasure as one of Padre Pio's chickens rotated gracefully before the flames, and was roast to a satisfyingly succulent crispness. (Not the real Padre Pio, but our Pisan poulterer, who used to be an avid follower of the beatified cleric) 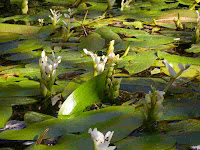 The garden behaves so well at this time of year: late roses on the south pergola, the surface of the lily pond a mass of white water-hyacinth flowers , and the house pergola a fantastic combination of jasmine blossom (jasminum angulare) against the bulls-blood red of the autumnal hu 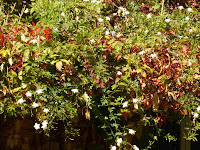 e of the creeper. Yesterday, I threw caution and workload to the winds and sat under the Caci tree in the midday sunshine, with a glass of chilled vernacchio di San G, and the fifth of this year's Booker shortlist - Amitav Ghosh's 'Sea of Poppies'. Good book, but absolutely lousy shortlist.....despite which, half an hour of midday sunshine in the middle of the garden was still spectacular.

Crepes Suzettes
Posted by Pomiane at 19:19