Kiev. On being banished there for a couple of days last week, my expectations weren't high, having been exposed recently to other capital cities from the erstwhile eastern bloc. In my experience, the aesthetic of these places ranges from the drab dreariness of Moscow and Belgrade, to the Disney-esque spicky-span perkiness of Riga. Not a great recommendation at either end of the spectrum.

And so, it came as a pleasant surprise to find a charming and cosmopolitan city, with tree-lined avenues, cobbled streets and elegant squares. Driving in from the airport, the gilded d

omes of St Michael's Cathedral were visible from way off in the distance, glinting in the afternoon sun, dominating the old town, and looking down to the Dnieper which flowed densely past at the foot of the hill. And as my taxi began to negotiate the streets of the city itself, the vistas were of neo-classical facades and a sense more of Vienna than of Nishny-Novgorod.

My personal mission whilst there was to track down the real Chicken Kiev...not least to confirm to myself that it really exists, and it isn't merely a construct from King's Road Bistros in the sixties.

On the first evening I was comprehensively thwarted. On asking in the hotel for a restaurant that was both scenic and traditional, we ended up literally on the Dnieper, in a heavily built wooden boat, the interior of which had been

transformed to resemble the inside of a woodland dacha - complete with tiled stove and log-lined walls. It might have been scenic to look at, but not to look from, and the view through the window was of the concrete supports of the motorway bridge that led over to the opposite bank of the river. At least all our fellow diners were reassuringly local, as the kitsch quality of the setup immediately and disconcertingly screamed 'tourist'!

Tatyana, our dirndl-clad waitress, conveyed as much by facial expressions as by dint of her very broken english that she would not recommend Ukrainian wine, and steered us instead towards a white georgian vintage, that at first gasp took the enamel off the teeth, but - as is generally the case - by the second glass had settled down to being perfectly drinkable. And to go with it, we ended up having vast bowls of soup, sunk within which were large and unexpected chunks of flora and fauna, which were followed by a rich variety of dumplings, stuffed variously with liver, and cabbage, and potato, and 'meat'...all accompanied by bowls of sour cream and a towering pile of fried potato cakes. It was all sticks-to-tiny-ribs stuff, and by the end of the second course we were forced to concede defeat, and wave away Tatyana's suggestions that we move on to yet more dumplings - filled with cherries this time - for dessert. Of Chicken Kiev, or anything even remotely resembling it, there had been no sign whatsever on the menu - but it was certainly with a sense that we could face anything that the frozen wastes of the steppe could throw at us that we made our way outside ...to our waiting taxi.

And on the following evening...success! As a welcome relief from a day of windowless, air-conditioned meeting rooms, we emerged into evening sunshine and the calm at the end

of what had obviously been a glorious day. Making our way along the quiet streets that led behind the cathedral compound, we took the steep cobbled route down past St Andrew's Church - in the baroque gloom of which the guardians were putting up heavy wooden shutters and shooing the faithful out - and past the corner house where Bolgakov famously wrote The Master and Margerita. The waning even

ing sunlight was luminous, and we looked out and down over the city at twilight, as it gradually became a sea of twinkling illumination. Yuriy, our guide, both confirmed the existence of Chicken Kiev, and thought long and hard about where we should go to get a 'good' one.

We ended up, as the result of his serious contemplation, at a place called The Corsair, and decided to sit outside, since it was still - we mistakenly thought - just about early enough in the year still to do so. More georgian wine - our waitress steered us firmly away from the Azerbaijani bottle we'd thought looked interesting - and in fact a pro-georgian theme within Kiev began to emerge...which, given the political environment, was hardly surprising.

Pickled vegetables, yet more dumplings, and finally, Chicken Kiev! Looking like nothing so much as an enormous scotch egg... suspiciously perfectly formed, it looked more like the p 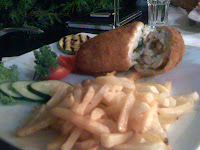 roduct of a manufacturing process than the loving care of a babuschka in the kitchen. And I'm afraid that was pretty much how it tasted, as well. 'Bland' is probably the most polite word that springs to mind, and the dish certainly lacked the garlic-and-lemon kick that I associate with a properly made Chicken Kiev back at home. In fact, probably the most babuschka-like element of the evening was the sight of my companion ('The blonde' as A.A.Gill would probably have called her, and in this instance would probably have been thumped for his pains) swaddled in acres of blanket that had been thoughtfully provided by our waitress in order to keep out the cold; although the day had been hot and sunny, Ukraine in the first week in September is certainly not the french riviera! And the result of the Chicken Kiev hunt? Well, I was left still not entirely convinced of its truly ukrainian provenance, and cynically suspected that in fact what we were served had been shipped in in bulk from somewhere else, and in fact had been made in a Brake Bros factory!

Next week, by chance, I'm in Mumbai. Maybe I should see how I get on there in search of the real Chicken Tikka Masala!

Raspberry Soufflés
Posted by Pomiane at 18:44

Have fun with your Mumbai quest...;-)