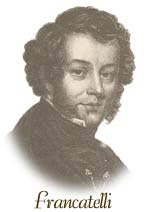 ....under the sun. And certainly nothing new, it seems, in people vaccuously pontificating about how everybody else should organise their kitchens and their cooking arrangements. He may not have been Scots, or called Gordon, but it looks as though Messrs Brown and Ramsay were forestalled by 150 years or so by somebody called Charles Elmé Francatelli, who was laying down the law already in 1852 in a natty little tome he'd produced called ' A Plain Cookery Book for the Working Classes'. Taking as his starting point that 'every day it would be possible to feed a thousand families on the food which is wasted in London' - and where have we heard that, more recently? - Francatelli proceeded to explain the process of producing culinary delicacies such as Bubble & Squeak and broth made from Cow's feet - ok - as well as something called 'Sheep's Pluck' (sounds nasty) and a 'Pudding made from Small Birds', which to my tin ear just sounds uncomfortably crunchy. 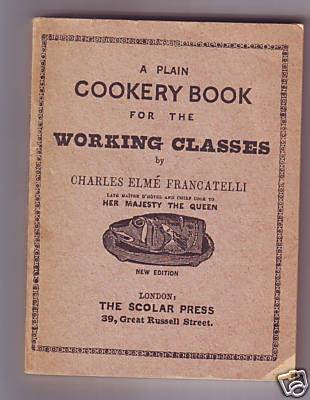 We have to hope that Francatelli was more practical in the kitchen than he ever was as a would-be social reformer, since he appears to have blithely ignored both the literacy levels of his intended audience, as well as the inability of their purses to stretch to purchase of either the book or the ingredients! Actually, it may be that he wasn't in fact that much more practical in the kitchen as, although he is generally heralded as the 'Chef to Queen Victoria', he was only in royal employ for less than a year. Maybe he didn't match up to Albert's teutonic standards of efficiency - or maybe they just got fed up with picking the remnants of small birds out of their teeth, and stepping in discarded pieces of Sheeps Pluck on the Aubusson?

uld we be holding our breath for a 2008 updated version from the Heathcliff of modern politics, with all the wit and culinary wisdom likely to be found within its pages? What an appalling prospect - I certainly hope not!

Sorbet of Passionfruit & Banana.
Posted by Pomiane at 16:57

As you say, nothing new under the sun. I was born just after the war so was brought up to utilize every scrap of food and to waste nothing. That ethos sticks with me even now and if I have to discard something, it goes into the compost bin.

We used to be able to buy just the right amount of fruit and vegetables but now so many things are pre-packed in such large packages that I might just as well put most of the contents straight into the aforementioned bin. The only help at hand is to shop at Asian stores where you can but as much or as little as you want.

Well, I can't claim the wartime ethic, but I can state unequivocally that NOTHING that could be eaten ever gets thrown away in this household! Leftover pasta is fried for lunch, leftover roast goes into salads and stuffings, leftover sauces get recycled in other guises (sauce for a main course fish one day becomes auce for starter Tiger Prawns the next). Hence I suppose my irritation with the patronising pontification. Grandmothers, eggs, sucking, and an uncompromising imperative spring instantly to mind....