This week in Pisa... 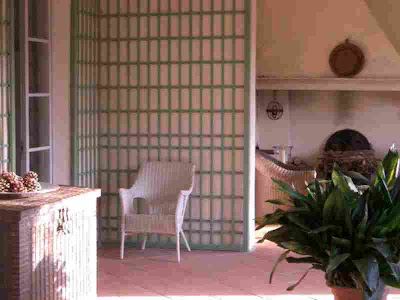 The weather is grim. Either unpleasantly hot and airless, with thunderstorms threatening, or else - almost without warning - dropping back to sweater-wearing temperatures, and the rain coming down like chairlegs. Apparently, Tempo Italia forecasts a summer of more of the same - so one just has to hope tha 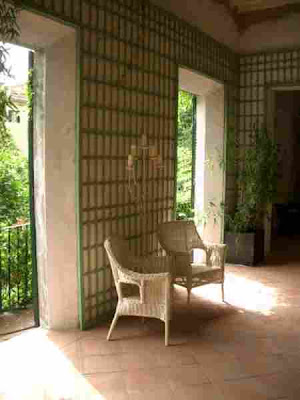 t Tempo Italia is about as reliable in this as it normally is in everything else..Fortunately, the Technical Department has finished his Trellis project in the Loggia, so at least the place is now free of DIY paraphernalia, and is comfortably available for use - if only to be able to sit in, in order to watch the rain! 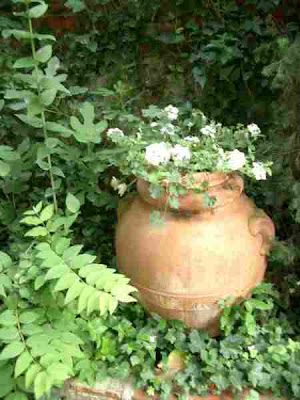 The garden takes no notice of the lousy weather, and puts on growth at a rate of knots. Keeping the pergolas trimmed at this time of year is like painting the Forth Bridge, and I know that when we return after a fortnight's break the place will have reverted to jungle once more, and I'll have to start the hacking-and-slashing process all over again. The Bergamot has settled in well, and has put on a spurt of new growth - eve 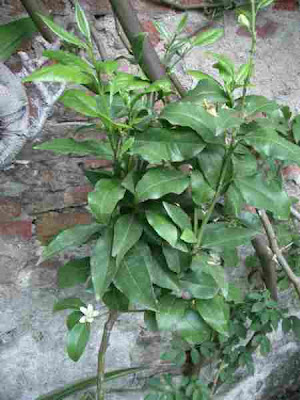 n a small display of blossom (which smells amazing) and the promise of fruit later in the year. I confess, I'm not quite sure what a Bergamot is, and have no idea what the fruit will be like - they don't normally grow round here, and are generally found no further north than Calabria. Research reveals that the Bergamot plant is a cross between a Seville Orange and a 'Pear Lemon' (no, I hadn't, either...), and that it is used in making scent and in Earl Grey Tea - although I imagine the bit used in making scent comes from the blossom, rather than from the fruit. More research needed, clearly. Watch this space for bergamot-based recipes , later in the year...

Town is limbering up for June, which is when pretty much all of the annual festivities here get crammed

within one month: the Luminara; the Giocco di Ponte; and the Palio. The streets are closed to traffic along the Lungarno for most of the month, and all sorts of 'special events' are organised, like a tour of private gardens within the Centro Storico (which is show-stoppingly unimpressive) and the annual opening - for one day only - of the archaelogical site where several years ago they found the remains of the ancient harbour, and the remnants of all the Roman and Greek boats that had ever sunk there, over time (which is definitely worth taking a look at)...

Strawberries with Balsamic, I also came across a recipe for Hasselback Potatoes with a poultice of Lemon and Garlic and Sage. Good in itself, it also suggests all sorts of other ways of treating the dish, with different fillings that can gently melt and cook deliciously between the slices of roasting potato - wonderfully fatty pancetta, for example, would be splendid.....Until now, I hadn't thought of doing the recipe any way other than bog-standard, as copied from Alastair Little many years ago, but in practice there are all sorts of variations that can be played on that basic theme. To be explored...

Risotto of Basil (made with Rabbit Stock).

Swordfish, sautéed with Onion and Garlic.

Cherry Clafoutis.
Posted by Pomiane at 13:56