....has started in a storm of activity. Well - for us, at any rate. In fact, the first of the month, which for everybody else in Italy is an annual holiday, in this household is the day in the year when we forget that the whole place is closed down, and invariably have forgotten to provision in advance......I don't know the reason for the mental blockage, but the process of forgetting happens every year, as regular as clockwork. The provisioning aspect would have mattered less, this year, were it not for the fact that my parents were arriving that day for a visit.......and menu plans for the weekend were instantly thrown into complete disarray. Quick thinking and recourse to the store-cupboard ended up with a scratch supper of Rabbit Terrine, Sage & Onion Risotto, and Vanilla Apple Tarts. Honour was just about preserved!

Dinner was preceded by a stroll down to the river, and around the regional Italian Food s

how that had taken up temporary residence in the Loggia dei Banchi, just beside the Commune. In the evening sunlight, we wandered from stall to stall, sampling cheeses - in general, not a highlight of Italian cuisine, and frankly there were no surprises on this occasion - and Salami, and various more or less exotic alcoholic beverages. I ended up investing in a Salami which rejoiced in the name of Mulette a Barolo (apparently made from a strain of wild pig) and a bottle of Crema di Mandorle, which was like a turbo-charged version of Orgeat, and would definitely not merely have blown the bloody doors off ......

riday: to Florence, and the Library at San Lorenzo. Its eccentric opening schedule has meant that I've never actually seen it before, and the visit was long overdue. And splendid, it was! From the majesty of the staircase, bizarrely encased within a space of blind walls, so that its theatrical downward sweep ends up going nowhere, to the calm of the Library itself. It left us pondering how Wren could possibly have recreated the space so perfectly in Greenwich and Cambridge given the tenuous basis for any knowledge he might possibly have had of San Lorenzo's existence. As yet, the riddle remains unsolved. Lunch - of course - at Camillo: lack of imagination meant that yet again I had fried rabbit, which is so delicious there, followed by a Torte di Riso - the texture of which prompted research in Pradelli as soon as we were back in Pisa, to find out more. This is yet another of those dishes that smacks of times long past, the idea of which is always so fascinating.....More on this at a later date, I think (being mindful of the limited powers of concentration of some readers in Stoke Poges, who have been known to complain about the length of posts...) 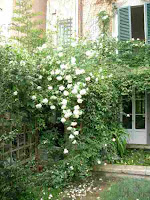 Saturday: a gardening day. Everything is responding splendidly to the arrival of summer, and the place is festooned with cascades of white roses (Mrs Herbert Stevens; City of York; Sombreuil; Mme Alfred Carriere; Paul's Perpetual White...) as well as Irises, Arum Lilies, Marie Pavie, snowdrifts of Jasmine blossom, and the first of the year's crop of Passion Flowers. In addition to hacking and slashing on an industrial scale, to ensure that we don't end up dro 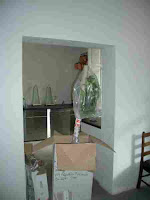 wning in floriforous vegetation, I found time to plant a Bergamot Tree (Dario had sent it from Sicily, where he was apparently filming a documentary for National Geographic along with A.A.Gill - how that came about, I haven't the faintest idea!) and spraying the Persimmon Flowers with a noxious insecticide that I hope will stunt the crop, and mean we don't have to deal with several thousand over-ripe persimmons next autumn! Otherwise, the lemon trees are all showing an incredible crop, this year, and I am extremely proud of the 33 fruit (as yet quite tiny) which are gracing the branches of the White Peach tree. As a noisy backdrop to all of this - much sawing and hammering - the Technical Department is working on enclosing the central section of the Loggia in a thousand metres of trellis, all of it painted an elegant copper-oxide green, just like the railings outside Apsley House.

Sunday: To Brancoli, to visit the beautiful Crusader Church of San Giorgio, and then down

the hill to inspect the gardens and the vineyard. All looking wonderful....from the rose pergolas, to the wild orchids, to the stunning display of wisteria (variously white, purple, and pink), and of course the vines, bringing on this year's embryonic vintage. We drank some of the 2005, to accompany a perfectly barbecued tagliata, and had the first (Italian) al fresco dinner of the year, looking out and across the valley, down towards the lights of Lucca twinkling far off in the distance. Eventually, in true tired-but-happy style, we meandered homeward down the hill at the end of the evening, laden with the usual ill-gotten gains of Brancoli Marmalade, and Brancoli Olive Oil, and several demi-johns of Brancoli wine......

Roast Beef, with Turnips roast in Goose Fat (Oh, to be in England...!)

Amaretto Soufflés
Posted by Pomiane at 08:50

Do you still have your kaki tree? Here is an interesting use for the fruit: a muffin with chocolate.
http://www.davidlebovitz.com/2010/12/chocolate-persimmon-muffins-recipe-kim-boyce-good-to-the-grain/

In fact - having moved house - we no longer havethe Cachi tree previously mentioned ...but instead have four others, all of which are heavy with fruit. I was interested to read the post about Muffins; not sure I can do it, as I think buckwheat flour isn't available here...but I agree with David Leibovitz about the beauty of the bare branches festooned with large orange globes (and that's even after having given boxes and boxes and boxes of things away to friends!)