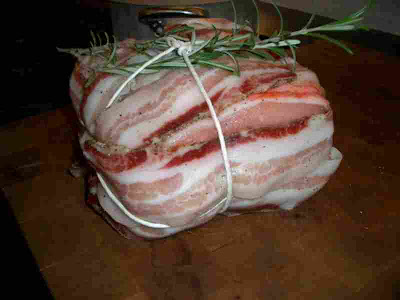 This recipe was a recent and splendid new discovery - hailed by the Technical Department as the best version of roast Pork since the classic version with a mustard-and-herb poultice that was immortalised by Julia Child, forty years ago now, in 'Mastering the Art.
I was sceptical when I first looked at this one. Having long been devoted to the Barbara Kafka method of roasting (heat the oven to smelting temperature, and then blast the meat for as short a time as possible), the idea of heating the oven to only 175 degrees C seemed highly dubious. And then the fact that the meat only cooks for fifty minutes at that temperature.... Hmmm..

But, it works! Even the slightly unexpected combination of Pork wrapped around Pork works well, as the Pancetta becomes beautifully crisp, while the loin within is tender and succulent.

Potatoes are added as an easy means of cooking a vegetable at the same time. If you wanted to omit them in order to serve a different vegetable instead, this would be fine.

Ingredients: 1 kg boneless pork loin; 250g sliced Pancetta (not the affumicata variety for this dish - and also, I suspect it has to be true Pancetta; this isn't an occasion when you can substitute bacon rashers and expect it to work just as well); 4 sprigs of fresh Rosemary; 4 large Garlic cloves, peeled; 1 kg Potatoes, peeled and cut into chunks; 8 tablespoons of Olive Oil.

2. Season the Pork Loin and wrap it in the strips of Pancetta; then, tie the bundle loosely with string. (Don't make too much of a meal of this task, and worry about the end result being too beautiful - the string really needs to do its job only during the period when the bundle is being seared; after that, the searing process will have caused the Pancetta significantly to stick together and adhere to the Loin, even without the help of the string. When doing this task, I was forcefully reminded of a Christmas job at Selfridges, once, spent stringing packages in the Small Electrical Goods department - which suggests exactly how much three-star skill I was bringing to the job at hand!) 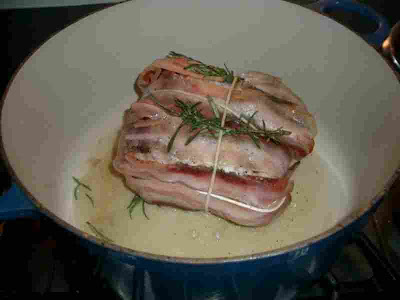 3. Under the strings, insert the sprigs of Rosemary.

4. In a heavy casserole, heat half of the Oil to 'searing' temperature, and colour the bundle on all of its sides - about a minute on each side.

5. Add the Potatoes to the pan, around the Pork, along with the cloves of Garlic. 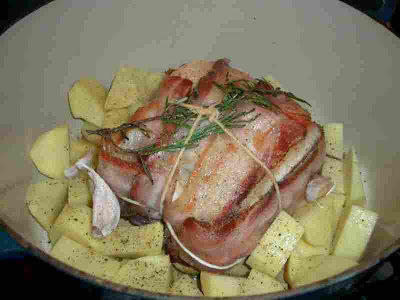 6. Generously season the Potatoes with Salt & Pepper, and pour the remaining Oil over them all. Stir with a wooden spoon to ensure the Potatoes and Garlic are well covered with Oil.

7. Place the pan, uncovered, in the pre-heated oven and roast for 50 minutes. Test for done-ness by inserting a skewer into the centre of the Loin and putting it to your tongue to see if it is hot (if no 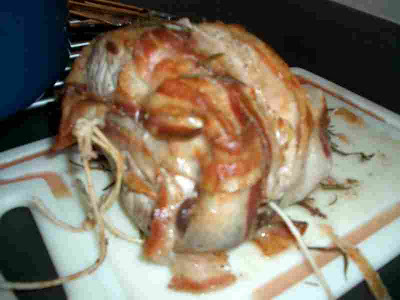 t, the Pork needs to cook for longer - but this shouldn't be the case).

8. Leave the Pork to rest for 10 minutes, and then slice and serve it with the Potatoes.