I like the food; the wine; the art (for the most part); the weather - in all its manifestations; the people (in general); the architecture; the gardens; the landscape......in fact, in most ways, I'm fairly positive about Italy in all of its myriad shapes and forms. For all that, though, I have to admit that the place still has its occasional drawbacks. Chief amongst which is probably 'getting things done' . It is.....a Nightmare!

An example: Several years ago, inspired by the presence in Pisa of the Saint Gobain glassworks, and thus by the ready availability of mirror 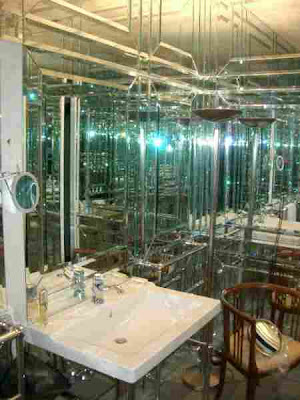 and glass cut to any size and shape you could possibly want, the Technical Department decided to create a mirror-lined bathroom. And not just any old mirror-lined bathroom, but a cross between the Amber Room from Tsarskoe Seloe and some kind of racily decadent Emerald-Cunard fantasy. With over 850 pieces of individually cut and bevelled mirror, the plan was for an enormous three-dimensional jigsaw, covering every vertical surface in the room. The mere description caused most of our friends to blanch at the thought that they might one day be expected to use this particular bathroom, and be confronted with views of their own naked forms reflected from more angles than they'd ever thought they had angles! 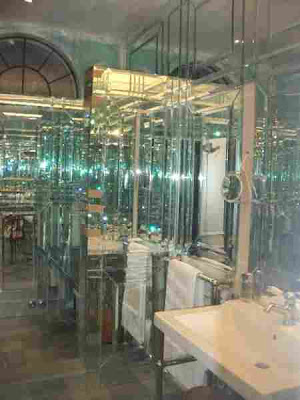 ars later, and the project was almost finished. Which was already more than a year and a half longer than had originally been envisaged. Along the way, frequent delay had been caused by the clash between the two incompatible concepts of the 'Brazilian Right Angle' (our brazilian builders appear not to believe in them, and there seems not to be a single one in the entire place) and the 'Pisan forty-five degrees'. It turns out that the glass cutters were working by eye in cutting the pieces of mirror.....with the inevitable result that many of the pieces of the jigsaw just didn't fit, and had to be re-done. All things considered, it's no surp 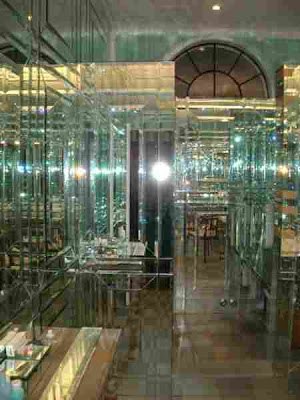 rise that the Leaning Tower of Pisa does exactly what it does!

Even so, by last summer, all was done, apart from the last sections of mirror to go around the lunette window in the shower area. Maybe twenty five or so pieces in total. Which were duly ordered, in a bit of a hurry, before the middle of July in the hope that they might be delivered before Saint Gobain closed down for August. Ha! I can feel hollow laughter rising up even as I write that.....The way things are going, by next August would be stretching optimism to its limits!

Even Billy Bunter would have been embarrassed by the thinness of the excuses for non-delivery, as the months have rolled past. On each occasion, a date and time has been fixed, arrangements made to be at home when they arrived....even telephoning ev

ery twenty minutes during the course of the afternoon to follow the progress of the truck on its rounds.....with the excitement building as the moment got ever closer....until of course the evening closed in and realisation would have to be confronted that, yet again, they weren't actually coming. "They got to the end of the street, and the truck was too big...", or "There was an accident on the autostrada...." , or "They were just about to arrive and discovered that every piece of mirror had been broken in transit...."or "There was suddenly an emergency delivery, and they had to go and do that instead". Short of the dog having eaten their homework, they've used every plausible and quite a few implausible excuses they could come up with.....and in fact have taken to leaving the phone off the hook for the day following the non-appearance of yet another promised delivery, just so they don't have to deal with the irritated Inglesi yet again.. There aren't even really any attempts at excuses any more, just resigned acknowledgement of the fact that once more, it simply hasn't happened.

The mirror was due, for the umpteenth time, to be delivered last Monday. And when it wasn't, the explanation was that in fact the arrangement had been for Tuesday. And so, when nothing arrived on Tuesday, there was no real explanation - or attempt at one - but merely the statement that it would be delivered next Monday. And do I believe it? Not for one nano-second. But, since there's nothing to be done, then the only alternative to pretending to believe what

they say would be merely to give up. Which isn't an option......because it can't be an option.

In the same way that we carry on waiting for the quote from the builder to lay the new Salone floor, which was promised faithfully by the end of December, and then by the middle of January, and then by the start of February....Maybe his truck is the wrong size? Or his dog's eaten the estimate? Who knows....

And much of this week has been taken up with waiting for the post office to deliver a package, which Post Italia's online tracking system faithfully swears has been 'attempted' on three occasions, on all of which we were at home, so you'd think we'd have noticed them trying.....and now it doesn't much matter, since the fact that they've 'tried' and failed sufficiently often means they won't try again, and we'll just have to go to them to pick it up ourselves instead......

And the process of trying to pay a Telecom Italia bill online (which you need only mention to any expat in Italy to rouse gales of cynical laughter.........although, actually, you don't need to mention the online bill-paying bit, just mention Telecom Italia, and people's eyes start to roll ...!)

So, all things considered, it's rather a good thing about the art, and the food, and the wine, and the weather, and the landscape....which all-told do a pretty good job of ungritting the teeth at the end of the process of trying to interface the system. Or is

it the other way round, and the presence of the art, and the food, and the wine, etc mean that nobody can ever be bothered much about the state of the system in the first place, which is why it's all in the condition that it is? You know, I think I might just have to ponder that one over a glass of wine.....

Fresh Mango & Strawberries in Cointreau.
Posted by Pomiane at 15:12