......isn't at all the experience that I thought it would be. Two weeks of abstinence, and I can happily bypass the drinks tray and ignore the wine-rack in the kitchen with no sense whatsoever of a longing denied. Having observed various friends over the years go through the agonies of giving up smoking, I'd assumed that to go cold-turkey on the intake of alcohol would require similar strength of character. Let's face it, I'd always harboured a sneaking suspicion that, like most people, my daily 'moderate' consumption in fact probably represented a mild form of addiction (which would only truly manifest itself at the point when I denied it in practice) - and I could be forgiven for thinking so: in the past thirty years , I doubt there'd been a single day when I hadn't partaken in some form or another.......

If anything, I'd say my system reacted more with a sense of surprise than with any feeli

ng that I craved something that was suddenly missing from my life. For the first few evenings, I'd find myself instinctively recognising the 'time for a glass of Prosecco', around seven o'clock, and then, when I remembered that we weren't doing that at the moment, I'd feel slightly flat, perhaps even a little disappointed - but not in the least tempted to reach for the bottle. And in fact, when the Technical Department replaced Prosecco as the evening tipple with a glass of iced tonic-water (slimline) to which half a dozen drops of Angostura Bitters had been added, then even the slight sense of disappointment was entirely dissipated. It's a delicious drink!

And in fact, I've concluded that for me that's essentially what it's about. The

flavour. I like the flavour of wine. Mineral water - iced, frizzante, refreshing - is alright in its own way - but ultimately it is extremely dull stuff. And it does absolutely nothing for the Roast Duck or the baked Sea Bass that it dispiritedly accompanies; last night, we started dinner with salmon and tarragon tarts, with a lemon-butter sauce.......and from the first mouthful, the dish was crying our for a glass of chilled Pouilly-Fumé. Which it didn't get. We weren't even tempted - although, that isn't to say there weren't some comments made with regard to probable future consumption.

What else? Well, none of that stuff they'd have you believe is true, that you feel skippie 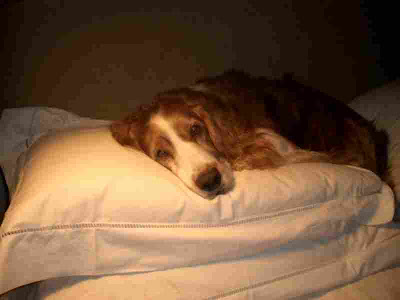 r and brim-ful of energy, and can't wait to throw off the covers in the morning to greet the bright new day. Quite the opposite, in fact. Much to my surprise, I discovered that absence of alcohol gives rise to nights of deep and unbroken slumber, and the only thing that wakes me in the morning is the junior four-footed sitting on my head to indicate that he thinks it's time for breakfast Bonio! Now that - the nights of unbroken sleep, I mean - is quite blissful! And I quite like the fact that I can actually get things done after dinner, each evening, whereas previously the most that would happen would be to slump over a book and a glass of grappa, beside the fire.

So, all in all, the 'experiment' hasn't at all been a hardship - and I've concluded that for me alcohol is far from being an addiction, but had instead become merely an unthinking habit. And like all unthinking habits, requires serious consideration. The current period of abstinence doesn't have a precise end-date - which again is something of a surprise; when we started, I expected to have the 31st of the month ringed in red on the calendar, with corkscrews at the ready. No, I think alcohol will be re-introduced, but it will be on the basis of positively deciding that a glass of something would particularly complement whatever we happen to be eating, rather than opening a bottle just because it's that time of the evening. So, what began as the equivalent of that fat bloke's new year's resolution to join a gymn, buy a new tracksuit and take up jogging (for at least a week and a half), looks set to take root. Who'd have thought there could be so little involved in regime change?

And what was the other thing? Oh yes - the avoir du poids has been dematerialising, too, at a rate of knots!

Seared fillet of Salmon, with Lardon Sauce, served on sautéed Endive and Leek.

Cherry Tarts.
Posted by Pomiane at 23:06

Hmm... interesting thought. We always have wine with dinner and sometimes more afterwards. I often think that I wouldn't be able to sleep without it but you have made me wonder about that...

I really appreciated this post as I felt like you were describing my drinking habit, and thoughts about my habit, exactly! I drink wine just like you do - something to sip on in the evening while cooking (yes, prosecco is ideal), the appropriate wine with the dish (what fun to match) and occasionally a grappa or after dinnner sip of something. And like you, I slump over a book in the evening, thinking I should be "productive" instead, and wonder if I should give up drinking wine. I like your exercise of stepping away from it for a while to get perspective. It is time for me to do that again as well. My husband, being Italian, drinks like you and me, perhaps a bit more, and has now taken almost one year off from drinking due to medical problems. Lo and behold, it didn't kill him either and it wasn't as difficult as he thought!

OH, and Bonio is beautiful.

Well, I certainly would have thought I'd be climbing the walls if I had to go any length of time without the demon drink, so I'm really quite surprised. Rather than any higher motivations on perspective, though,I suspect my true reasoning was all about a pair of Armani Jeans bought just before Christmas that I found after New Year I couldn't even get into,let alone try to do up! Which, by the way, I put on yesterday for the first time and found that they now fit perfectly....
We took a gentle jog-trot off the wagon for the weekend, for social reasons, but will climb back on it this evening with no problem whatsoever....