To Trattoria Albana in Mazzolla, for lunch, on a dreary, rainy January day. It was a birthday celebration for one of the Belforte crowd, and the venue had been suggested as being halfway between Belforte and Pisa - Mazzolla being a l

ittle hilltop village two or three kilometres south of Volterra. The claim of equidistance was not entirely accurate, but forgivable, not least on the basis of the quality of the lunch.

Albana is the sort of place where local hunters congregate after a good morning's slaughtering, and at the right time of year the occasional intrepid tourist can also be sighted, toiling their way up the hill and all the way through the village to where the

Trattoria is tucked away in its obscure little corner. Last time we were there was a couple of summers ago, in sweltering heat, when we sat under the awning outside and enjoyed a long and lazy and bibulous lunch, in the company of the owners' two large and shaggy and very friendly dogs. On that occasion, a walking tour of Germans had raggedly toiled their way into the little square over the course of half an hour or so, before collapsing in relief into chairs placed around the large table next to ours, generously supplied with iced water and chilled wine....

This time, Mazzolla was shrouded in wintry mist, and we had Albana entirely to ourselves - in fact, they'd only bothered to open for us, because we were a large enough booking to make it worthwhile. And instead of the terrace and the shaggy dogs, we took over their large inside room, a long and narrow space, with whitewashed walls and a barrel-vaulted terracotta ceiling. Apart from a couple of stags heads stuffed and mounted and hanging on the wall behind my seat, the room was otherwise bare.

d was ......excellent! Really, very very good indeed. Mixed antipasti to start, of which I can recall some courgettes finely sliced and cooked with a light vinegar; Crostini alla Toscana (chicken liver.......and an as-yet-unresolved debate about whether or not the recipe also includes spleen) and some others of wild mushroom; a delicious Caponata, which included pine nuts and sultanas along with the aubergine; little fish fillets, poached and served with a creamy sauce and cubes of ricotta; and a generous platter of salami, and sausage, and cured ham. Thereafter, the past

a course: I had gnocchi, which came with a light sauce of veal ragu cooked with finely diced wild fennel. Superb! I traded some gnocchi with some of my neighbour's papardelle con cinghiale, which was also splendid. Reports were enthusiastic from elsewhere along the table of spaghetti served variously with a spiced tomato sauce or else with funghi porcini.
To follow, I had chopped Pig's Liver, formed into large bocconcini by wrapping them in lardo di colonato, and then fried. Other options included grilled rabbit, or duck breast - and the morsels of the latter which also ended up on my plate were tender and delicious, and much better than duck generally is in Italy. 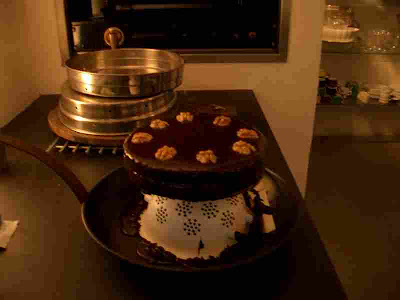 inish, we'd brought a Sachertorte, made at home the previous day and only iced that morning (which is what happens when you discover midway through a Sunday afternoon in Italy that you've run out of sugar, and have to halt production until the shops open again at 8 am the following morning!). Transported with great care, and handed to the kitchen on arrival, along with a single birthday candle and enough cream to whip for the assembled throng. "Oh", somebody cried, as a large piece was placed before them, "this looks just like Sachertorte!". Which was something of a relief........

I hardly need add that we fell (intentionally) off the wagon for the course of the lunch, and enjoyed a very good local prosecco, from Terriciola, about ten minutes down the road.....

Back on the wagon now. Only three more weeks to go. You know, in the right frame of mind, tonic water with a dash of angostura bitters really isn't so awful.

Fresh Mango, with Maraschino.
Posted by Pomiane at 18:09