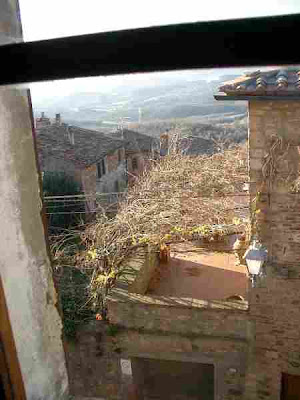 A gloriously sunny day, the beech woods in the valley below the village a rich, subdued russet. Bright and crisp and cold enough that the vapour rising from the power-plant many miles away is clearly visible, looking for all the world like the sulphur springs on an Etruscan wall painting; the skyline beyond, a timeless profile of rolling Tuscan hills. The only sounds which break the silence from time to time are the two, unsynchronised, village clocks chiming the hours and the half-hours.........and the occasional sound of gunshot from the surrounding countryside – two days after Christmas, and the boar-hunters are out in force! 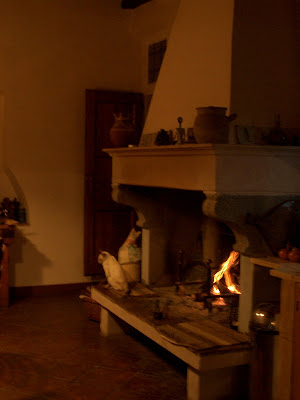 th an emphasis on little-but-good (actually, not so much ‘little’ but at least not wild and untrammelled excess). We feasted for lunch both days on smoked salmon and ham, helped on its way by a bottle or so of Verdicchio di San Gimignano. Afternoons - for me - were spent beside the fire, in the company of a cat or two, immersed in the pages of Harold Acton’s ‘Last of the Medici’ – essentially, wallowing in the tabloid gossip columns of three hundred years ago – and an additional log tossed on the fire from time to time, as necessary. One of the neighbours had delivered an offering on Christmas Eve of a cake about half the size of a ping-pong table, made with apple and pine-nuts and cinnamon which – unusually for Italian cakes – was light as air, and into which inroads were made at teatime each day – around the hour when people materialised from wherever they’d secreted themselves for the afternoon and it became appropriate to start to do things in the kitchen for dinner. 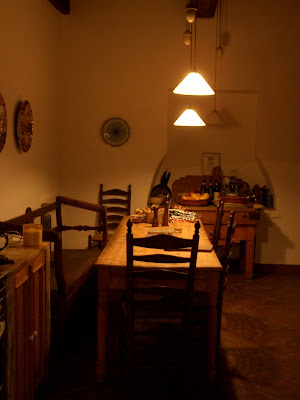 as Day: an Onion Risotto to start (we’d planned on Risotto of White Truffle, but were met with raised eyebrows in Vettovaglie last weekend when we’d gone truffle-hunting, to be told that there were no more to be had, not even ‘ per milliardi’ – which we weren’t about to spend in any case); followed by slices of the neck of the Goose, stuffed with pâté de foie gras, served on a crouton, and with a sauce of raisins and sweet wine (delicious!); then the Goose itself, boned and roast, stuffed with prunes and served with stuffed Cabbage leaves; and finally Crêpes Suzette (the assembled throng – mainly Dutch - had sampled Christmas Pudding in the past, and had decidedly vetoed it this time around…). Two bottles of a 1997 Château La Commandèrie later, and everybody was about ready to call it a day….

Boxing Day: lazy cooking. A Cassoulet which did its thing in the oven over a number of h 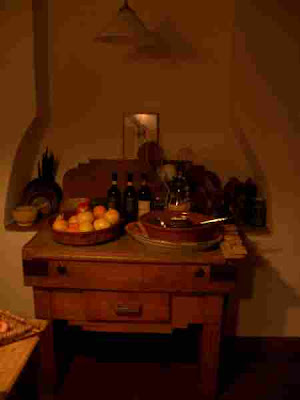 ours, and released delicious smells throughout the house during the day. Preceded by flamiches, made with leeks pulled that morning from the garden, and tasting all the better for it, and finishing off with an uncomplicated and perfectly satisfying Chocolate Mousse. Some of the last of the 1988 Haut Gravère ……..and that was Christmas done and dusted for another year.

Except that we return to Pisa this evening, where the tree and the remaining twelve days 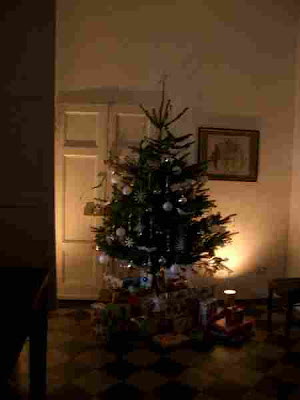 ’ of presents are awaiting attention, right through until the night of Ebufana on January 6th , when all the children get their presents, and the decorations only and finally come down.
Our habit these days is to spread present-giving over the entire twelve days – 6.30 each evening brings a glass of prosecco and an exchange of presents – rather than to have a glut of the things all on the 25th, and then a denuded tree looking rather sorry for itself and clearly wondering why it’s still there as the New Year comes and goes, and the decorations looking increasingly like guests who’ve forgotten to leave….Our strategy means the tree has purpose right through until the bitter end!