...to the foothills of Fiesole. To Harold Acton's Villa La Pietra, to be precise, and a glorious day on which to do it - which was doubly splendid after the week of sturm und drang we've just had, when it began to seem as if autumn had passed us by entirely, and we were plunged straight into winter already!

An interesting day. To step within the hallowed portals of the western world's self-proclaimed aesthete par excellence, and to have a glimpse of his gilded existence, apparently left untouched since he bequeathed the whole thing to New York University when he moved on to greater things - presumably now giving God a few tip

s about how best to arrange the furniture - about fifteen years ago. I've always been slightly in awe of my great friend Charles's story of having been invited to lunch with Acton sometime in the seventies, when La Pietra was in full swing - except that the main element in that tale was actually C's realisation on arrival that he was wearing odd socks, and the lengths he went to for the next two hours not to expose the fact. The 'art' seemed not to get much of a look-in on that occasion.

not that easy to get into, and on this occasion we were guests of the Lega di Chianti, a social group (not unlike the Rotary Club, or Round Table) who are somewhat right-wing in positioning, but they do have the entrée to a number of surprisingly good addresses across Tuscany - with the only downside being that to join you have to process through the streets of Florence from time to time dressed in an outfit that suggests that Bilbo Baggins has joined the Ku Klux Klan (except kitted out in gold lamé rather than in surplus bedlinen)

to opening the letter can be dismissed as apocryphal...) and so he ended up leaving it all to New York University, with the proviso that although they can use bits of the estate for 'furthering the interests of academia' the main house and garden must be preserved entirely as he left them. And so, amidst excited reports that the bequest, including Acton's fabulous collection, was worth either US$300 million or US$500 million - depending upon who you believed - NYU set to, and have been throwing money at the project ever since!

Our visit was well-staged. In order to protect the precious works of art 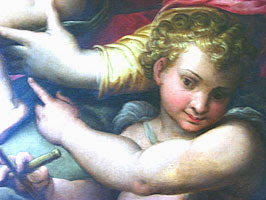 from the depredations of daylight and burglars, the shutters in all of the rooms at La Pietra are kept firmly bolted at all times, and a tour of the house takes place in conditions of subterranean gloom - which, if nothing else, adds a touch of drama to the affair (not lessened by the silent presence at all times of an armed guard in our wake). And so, in hushed tones, we were shown the 'possibly by' Vasari, and the 'Tuscan School of the fifteenth century', and the 'follower of' Giotto, interspersed with some very iffy bits from the early nineteenth century, about which nothing was said as we were hurried past, and ended up in the Drawing Room, amidst affectionately signed photographs of late members of the house of Windsor, highlights of which were a glamorous early shot of Princess Margaret, and a stiffly-posed photograph of Charles and Diana, in which she looked like an over-groomed afghan hound. And that was it.....

The fact is, I think NYU was had! There are some very nice pieces on the walls of La Pietra - to quite a few of which I'd be happy to give house-room - but I'm afraid that 'loosely attributed to' doesn't cut much ice in a sale room catalogue, and were Sotheby's

in Milan to have the whole lot dumped on them for disposal, then I suspect they would be seriously underwhelmed. Somehow, I think HA knew exactly what he had, and I can readily imagine him chortling with Nancy Mitford over a negroni or two in the Chinese Salon, as they considered the delicious joke of the 'priceless' Acton collection. If you ask me, both Eton and Christchurch knew their onions all too well......

Our tour was followed by the offer of lunch in the limonaia, to reach which it was necessary to cross the m 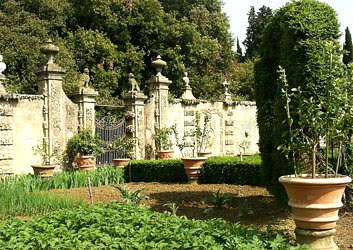 ost perfect kitchen garden you could imagine. Huge, and surrounded by high, lichen-covered walls, surmounted with bits of eighteenth century statuary, the serried ranks of Cavolo Nero and Lettuces and Onions and Cardoons were all coralled within trim box hedges, between gravelled paths, and dotted throughout this vegetable parterre were lemon trees in their pots, not yet quite ready to be taken indoors for the winter. Unlike the rest of the garden, which has been 'restored' to a disappointingly institutional standard and feels rather lifeless, the kitchen garden, resplendent in autumn sunlight, was rich and colourful and charming. Which was more than could be said for the lunch: corporate catering at its most uninspired. And since the curl of the tremezzani di tonno on offer was more than matched by that of our own li

ps, we beat a hasty retreat, summoned a taxi, and within ten minutes were firmly ensconced at our favourite table in Cammillo, in Via S.Jacopo. Not a 'loosely attributed to' in sight, as we tucked into tagliatelle con tartufo bianco, and refreshed ourselves with a carafe of genuine, honest-to-goodness house white.....Now, there's Art!

What a great story! Whenever I come across HA in other people's memoirs, I have always had the faint feeling that he was a bit of a fraud, but not enough real knowledge to know for sure ... on the other hand, there were people who really loved him (in particular Iris Origo)

Well, but DID she? I was pondering this very thing yesterday, when it occurred to me what close contemporaries they must have been in childhood Fiesole, and I went to check. In fact, the only reference I could find in 'Images & Shadows' was to the fact that the Christmas Tree and presents at the Actons were always larger and more expensive than anywhere else (which in Iris-speak sounds to me suspiciously like a synonym for 'vulgar') and although HA features in Caroline Moorehood's (IMHO not very good) biography of Iris, it's really only as a useful commentator from that period. So, I'm not convinced that she really had that high an opinion of him.....

Pear souffle IS good! It's another from Michel Guerard, with whom I'm currently enjoying a prolonged re-acquaintance....

Great story, with an even better ending... I love the mad dash to a real eatery!